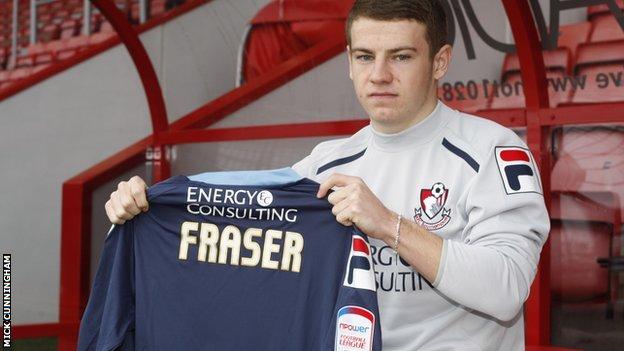 New Cherries signing Ryan Fraser says he is excited by his move to Bournemouth and wants to play a part in the League One club winning promotion.

And the former Aberdeen star admits he has already been impressed with what he has seen from the south-coast outfit.

"The club are on way up and I want to be a part of it," Fraser told BBC Radio Solent.

Several sides were interested in the Scotland Under-19 international but he says after coming down to see the facilities at Bournemouth, there was only ever going to be one club he signed for.

"It's just a very professional set-up," he said.

"The training ground is looking really good and the way Eddie has got the club playing their football in terms of their passing it is a club on the rise.

"All the lads are really nice and I'm really looking forward to getting to know them better."

Fraser, who describes himself as "direct" and someone who "likes to to get on the ball, use my skills and take people on", has been present at both of Bournemouth's last two games, which they have lost.

And he added he hoped he was not a bad luck charm.

"I saw the games against Wigan and they really excited me so I can't wait to get going," he said.

"They didn't deserve to lose, they pumped them, I hope I'm not bad luck."

The Scot is currently waiting to be granted international clearance which could allow him to make his debut against Hartlepool on Tuesday.