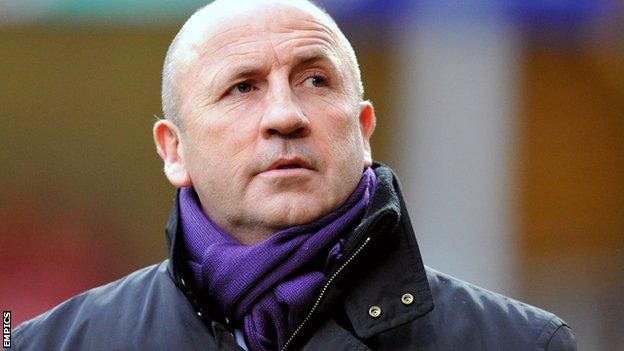 League Two Rochdale have sacked manager John Coleman and his assistant Jimmy Bell after 12 months with the club.

Dale, who are currently 14th in the table, have lost their last three games and have won just two of their previous 10 matches.

A club statement said: "The club would like to thank both John and Jimmy for all their hard work and endeavours."

The club have revealed that they hope to name Coleman's replacement before their match at Cheltenham on Friday.

Coleman, 50, leaves Spotland almost a year to the day after his appointment.

The Liverpudlian arrived at Rochdale last January with the club struggling in the League One relegation zone and four points from safety.

Having won just four of their remaining 19 matches in the third tier, Dale finished bottom, 12 points adrift of Leyton Orient in 20th.

And after a slow start to this season, in which they won just one of their first five League Two matches, the club have been on the fringes of the top seven and are currently six points off the play-offs.

Before moving to Rochdale, Coleman had spent 13 years with Accrington Stanley, making him the third longest-serving manager in English football at the time, behind only Sir Alex Ferguson and Arsene Wenger.

Coleman, who also had Bell assist him at the Crown Ground, took Stanley from the Northern Premier League First Division into the Football League.