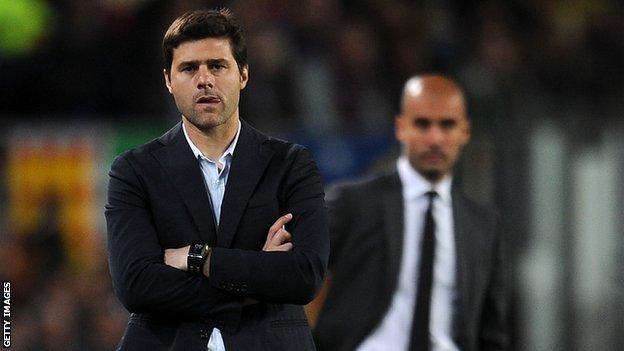 Pochettino, 40, has controversially replaced Nigel Adkins, with his first game at home to Everton on Monday.

"It's not as if they have brought [Jose] Mourinho or [Pep] Guardiola in," 76-year-old McMenemy told BBC Sport.

"They have brought in a chap, with due respect he might be a nice man and a very good coach, but who nobody has heard of. It is a terrific risk."

Adkins, 47, led the south coast club to two successive promotions to get into the Premier League.

Southampton had endured a difficult start to the season but had lost only two of their last 12 league games to move three points clear of the relegation zone before Adkins was dismissed.

Pochettino spent three years at Espanyol before being sacked in November with the club bottom of La Liga in Spain after earning nine points from 13 games.

"Normally, when a manager gets the sack it is because things have gone wrong but not on this occasion," said McMenemy, who warned Pochettino that he needs to quickly get to grips with his new role.

"The thing is [Pochettino] needs to hit the ground running. It's not as if you have got a pre-season to get ready.

"He has got 16 games left in which he has got to get the results to keep the team up and learn English. There's a lot to be done in a short time."

We don't know what reaction the players will have

Pochettino has drafted coaches Jesus Perez, Miguel D'Agostino and Toni Jimenez into his backroom team and they have replaced Dean Wilkins, Andy Crosby and Jim Stannard.

The new Southampton manager knows he has to win over the club's fans, who plan to wave white handkerchiefs at the televised game against Everton to indicate their displeasure at the decision to sack Adkins.

McMenemy, who led Southampton to FA Cup glory over Manchester United in 1976 and to their highest ever finish when they came second in the top flight in 1984, says Pochettino will also have to convince the club's players of his qualities as well.

"The players will give everything. There is not doubt about that. They are professionals and that is their job. But you don't win games by 11 people giving 100% all the time.

"The players will be looking to see whether the system will be the same and who is he going to pick.

"Timing is everything in sport and, at the minute, it doesn't look like the time of this decision was right. But time will tell."