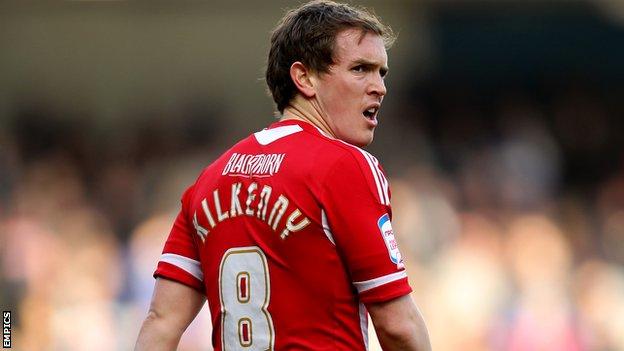 Australia international Kilkenny, 27, had not started a game since 1 December before Saturday's 1-0 defeat by Leeds - O'Driscoll's first game in charge.

Kilkenny arrived at Ashton Gate in June 2011 but was handed just seven starts this term by former boss Derek McInnes, who was sacked on 12 January.

"It's been hard for me this season and it's nice to be back involved."

O'Driscoll's side are bottom of the Championship, seven points from safety, but Kilkenny believes the former Forest and Doncaster manager's arrival has already made a difference.

"He's drummed in to us what he wants from us and you could see everyone responded," added Kilkenny. "Hopefully he'll play me more regularly.

"I want the team to push on and win games, stay in the division and I want to play as many games as I can."

"Neil did OK for us [Leeds] but I was never in the camp that thought he should play every week," said the 65-year-old former winger.

"There's no doubt he's a good footballer - a nice footballer - and I think his relationship with their new manager will be very good.

"He [O'Driscoll] always coveted him when he was here. Every game that we played against his sides he would say Neil was terrific. I think the two of them together will be a good partnership."