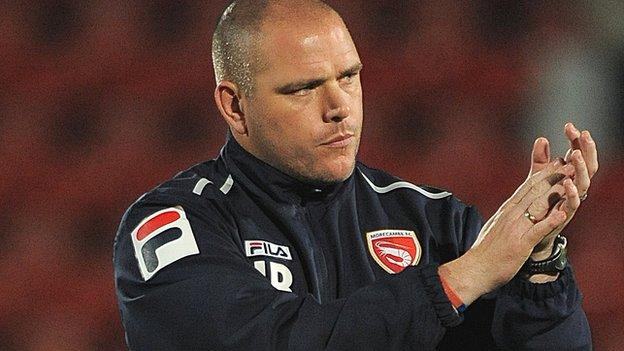 Morecambe manager Jim Bentley has said he is not worried by his side's lack of goals at the Globe Arena.

Friday's stalemate against Cheltenham was the fourth time this season that the Shrimps had drawn 0-0 at home.

"It proves one thing - that we're hard to beat," he told BBC Radio Lancashire. "In time, we will get goals.

"I always go on about clean sheets but we've got to start knocking the ball in the net at the other end. I believe we've got decent enough players."

Bentley continued: "Lewis Alessandra is playing very well at the moment, Kevin Ellison will always get goals, Jack Redshaw and Jordan Burrow will chip in with a few and now we've got Chris Holroyd until the end of the season."

Holroyd made his Morecambe debut on Friday, coming off the bench for the final 23 minutes, a day after

"As soon as he came on he looked sharp," said Bentley. "He's quick, he's sharp and he's a little bit different to what we've got.

"It was also a He showed some nice touches as well. I think they'll both be good additions to the squad."

Morecambe, who have not lost at home in League Two since 22 September, have scored 18 goals in 14 league games on home soil this season.