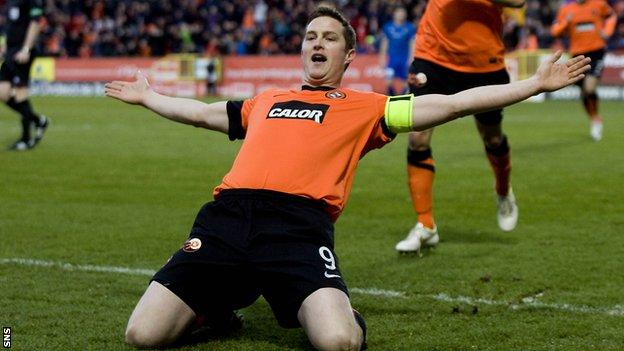 Dundee United captain Jon Daly is not enthused about the proposals to reform Scottish football.

Teams in the top two leagues of 12 would play each other twice, then the leagues would split into three sections of eight for a further 14 matches.

"I don't know whether I'm a fan of the eight-eight-eight split," said Daly.

"I don't feel it gives you a good crack of the whip. If you have a poor start to the season you can find yourself fighting relegation."

After those first 22 matches, the top eight teams in the three groups would contest the title and European places.

The bottom four of the top league and the top four from the second tier would make up the middle eight to decide which quartet played in the top flight the following season.

And the bottom eight teams in the second league would slug it out to avoid dropping into a league of 18 teams for the next campaign.

Daly told BBC Scotland: "Obviously, ourselves and Hearts would have been battling it out for eighth spot if we'd have had it after 22 games this season.

"Personally, I would probably prefer a bigger league.

"You get to know the teams you're playing now because you play against them three or four times.

"I would rather play home and away but it's probably down to financial reasons that everything is the way it is at the moment.

"But obviously it's not for me to decide.

"Clubs have got to look at what works for everyone, so it's a big decision to make.

Daly was speaking after his side's 3-2 victory over Kilmarnock at Rugby Park on Saturday.

It was the first game Dundee United had played since the club's announcement that manager Peter Houston will leave Tannadice at the end of the season.

And the Irish striker felt the three points showed that both Houston and his players are still fully behind the United cause.

"We won't use the manager's decision to move on at the end of the season as an excuse if we have a bad game," said Daly.

"The manager said it himself, he just wanted to get it out there so he could just move on and get on with the rest of the season - and that's what the rest of the boys are feeling as well.

"There's obviously a bit of uncertainty because you don't know who the manager's going to be next year, but that's football.

"You look at Southampton, who are doing really well, and then all of a sudden their manager gets sacked. It's just the way football is.

"The boys are professional enough that we realise that's the case."

Dundee United's goal hero on Saturday was Johnny Russell, who netted a hat-trick.

That means he is now level with Daly on nine league goals for the season.

Russell has often been talked of as a player who is destined for great things and United fans are willing the transfer deadline to pass so he stays at the club for the remainder of the season.

"I think he's showing how much of a talent he is," said Daly.

"When he does move on it'll be when the time is right, and obviously the club will let him move on when it's right for them too."