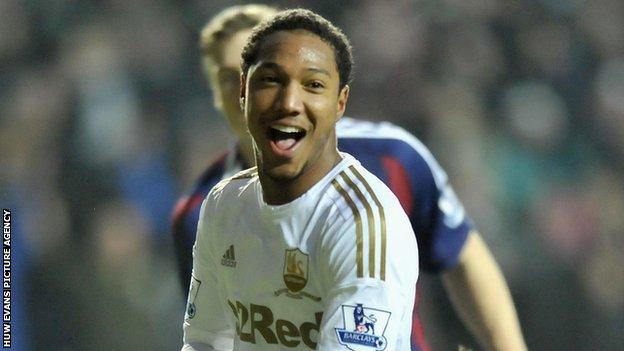 Swansea City manager Michael Laudrup is keen to keep Jonathan de Guzman once his loan deal ends in the summer.

The 25-year-old Dutch midfielder arrived at the Liberty Stadium last July on a season-long loan from Spanish side Villarreal.

"He is a player I would like to stay and I hope we can work a deal out with Villarreal," said Laudrup.

De Guzman previously worked with Laudrup at Mallorca and has again performed well under the Dane.

The player's ability on the ball has been a key part in Swansea's high-tempo attacking approach under Laudrup and De Guzman highlighted his talent with two goals in the 3-1 win over Stoke.

"I think Jonathan is very happy here but again, there are more interests to consider and it is not enough that I want him, that Swansea want him and what Jonathan wants," Laudrup said.

"It depends a lot on what Villarreal want, but we are going to try and do what we can and we will see if it's enough."

Villarreal paid almost £7m to capture De Guzman's services in the summer of 2011, before being relegated from the Primera Division at the end of last season.

That paved the way for the loan switch to south Wales, but De Guzman is under contract until 2016 and the Spanish club are likely to want to recoup as much of their original outlay as possible.

Laudrup will not try to force a deal through in January, but will look to complete a permanent deal come the summer for the Canadian-born naturalised Dutchman.

"He covers a lot of space and when he starts to run with the ball he keeps the pace, which is very difficult," said Laudrup.

"He scores goals as well and has assists and has been important for us. I am happy, happy for him."

Swansea now turn their attention to Wednesday's Capital One Cup semi-final second leg against Chelsea, where they can secure a first appearance at a major domestic cup final.

The Swans hold a 2-0 lead, but Wales captain Ashley Williams knows the job is nowhere near done against a side of Chelsea's quality.

"It's such a big game for us as individuals and as a club. We went up there, did really well and we have set ourselves up nicely," Williams said.

"But we know the job is not done and it will be as tough here as it was up there. They will come at us and we will be ready for that."