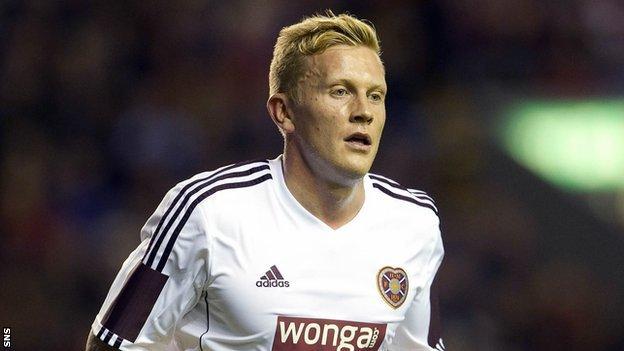 Hearts winger Andrew Driver has indicated that this season will be his last at the Tynecastle club.

Driver is out of contract in the summer and the club has already intimated that there will be major cost-cutting measures during the close season.

He was linked with a move away to China or Australia only two weeks ago, but the player says he does not know any more than the media do.

"I am only concentrating on my football," he told BBC Scotland.

Driver has endured a torrid couple of years with knee and thigh injuries.

It is only in recent months that he has shown flashes of the form that had the Scottish Football Association working hard to ensure he could represent Scotland, where he attended secondary school, instead of his country of birth, England, despite having played for England Under-21s.

His final clearance to wear the dark blue of Scotland came through in the summer of 2010.

"After a tough few seasons I feel I am starting to get back to a resemblance of my old self," he said.

"I've never lost confidence in my ability; it's just not happened for me at times.

"I'm confident it will come back and I hope it comes back on a more consistent level.

"I take every game as it goes and try to improve in every game.

"When you are out for two years that is a lot of football to miss.

"If you are in the gym for two years, as I have been, your body shape changes. That affects your confidence.

"It has been a long road to get where I was but things are starting to fall into place."

Driver hopes to play at Easter Road on Saturday where Inverness stand between the Gorgie side and a Scottish Communities League Cup final appearance.

Success would mean a quick return to Hampden after their Scottish Cup triumph there last May.

"It's a very tough game," said the winger.

"Inverness are flying at the moment so we know we've got a lot do but as a team we can hopefully use the experience that we gained last year and hopefully that will help us.

"We are a young team but we have a lot of quality. These young guys will be buzzing for this game.

"We all know we have underperformed this year even though we are in a transition. So hopefully in the cup we can get the one-off performance that would get us to another final.

"A semi-final of the cup is what we are in football for."