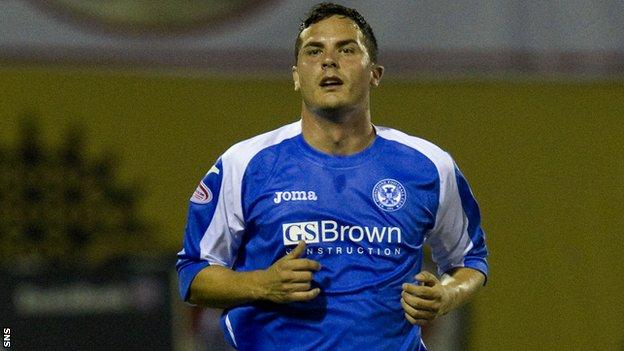 Miller sustained the injury in the closing stages of Saints' defeat at Motherwell on Sunday.

Davidson told BBC Scotland: "It's really disappointing. He can play right back, right midfield and he's got good energy going up and down.

"With Steven Anderson out as well, you're kind of limiting your back four and it could stretch us a little bit."

The injury to Miller, a summer signing from Ross County, occurred during an innocent challenge with Motherwell's Stuart Carswell.

"It didn't really look like there was anything in the challenge. I think it was the way he landed," said Davidson.

"When I talked to him [Miller] after in the dressing room I think it was suspected that he'd broken his ankle.

"But obviously the ambulance was there to take him to the hospital for an x-ray.

"So at the moment we don't know yet what the final results are but it didn't look good and I think he was in quite a bit of discomfort after the game."

Miller has made 20 appearances for St Johnstone so far in 2012/13 and Davidson hopes he will be back to make more during this campaign.

"Fingers crossed he might get away with it," Davidson said.

"If he has broken it he'll be out for a while.

"Then again, people tell you ligament damage is worse than a broken ankle.

"Sometimes a broken ankle's better because the ligaments take longer to heal and there's the knock-on effect from that."