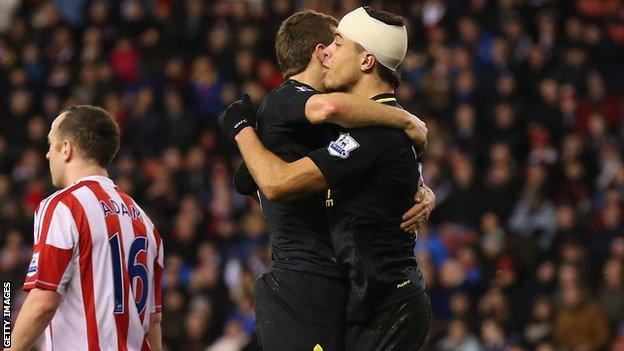 Wigan fought back from two goals down to rescue a point at Stoke and move out of the Premier League relegation zone.

But Wigan hit back, as James McArthur fired in off the post and Franco Di Santo swept in from McArthur's knock-down to equalise.

Stoke were on the back foot from then on, but held on for the draw.

For 50 minutes any result other than a home win looked unlikely, but Wigan manager Roberto Martinez will no doubt be heartened by his side's fightback.

There was a lengthy delay early in the game while Robert Huth had his head bandaged following a clash with Di Santo, but Stoke were soon on the attack.

Jon Walters's shot from 30 yards drew ironic cheers from away fans as it flew well wide of goal, and Adam's low effort from outside the area was just beyond the left upright.

But the home side were deservedly ahead after 23 minutes, even though the goal came in somewhat fortuitous circumstances.

Adam sent a free-kick towards the back post where Jean Beausejour's attempted headed clearance smacked into the back of James McCarthy's head and rebounded into the path of Shawcross, who scored from close range.

Stoke have conceded 15 goals in their past five league games.

Wigan almost responded immediately as Shaun Maloney showed great trickery to get the better of Geoff Cameron, but his teasing cross for James McArthur was cleared.

Stoke also escaped just before the break when Beausejour crossed for McArthur but the ball came in with too much pace and the midfielder's volley flashed wide.

Despite the Latics' occasional bright moments, the hosts generally looked comfortable and the second goal they sought arrived three minutes into the second half. Adam set off on a driving run towards the Wigan area and, with defenders backing off, drilled a low effort that Al-Habsi could only push into the path of Crouch, who sidefooted in from close range.

Stoke had barely finished celebrating, however, when Wigan halved the deficit. Roger Espinoza fed a pass between two defenders and the impressive McArthur raced through before hitting a shot with the outside of his boot that clipped the post on its way in.

The balance of play was now firmly in Wigan's favour and they produced attack after attack.

And they equalised just after the hour when Espinoza clipped the ball towards the back of the area for McArthur, who headed across the face of goal for Di Santo to sweep in from six yards.

The visitors went in pursuit of a third and Stoke keeper Asmir Begovic had to dive at full stretch to keep out a testing effort from the lively McArthur, while the Bosnian was again on hand to deny Shaun Maloney's curled effort.

Maloney's teasing cross behind the defence was poked narrowly wide by Di Santo in stoppage time, but the hosts survived to take a point they just about deserved.

Stoke manager Tony Pulis: "I am disappointed with the goals we conceded. It should never have happened. The people should stay with their runners.

"First half we were OK, we pressed and had the impetus, but after scoring the second goal you think you are going to win it.

"I couldn't see us getting beaten after we went 2-0 up, but we haven't beaten Wigan since 2009 and they seem to be a bit of bogey team for us."

Wigan manager Robert Martinez: "I am very proud of the players' performance. Going two down at one of the toughest places to go and the way we imposed ourselves was a credit for the team.

"We dropped two points and the truth is we can't give two points away. We are looking at the points left to play for and we want to get as many as we can.

"We shouldn't have conceded two goals but I couldn't be prouder of our performance in the second half."