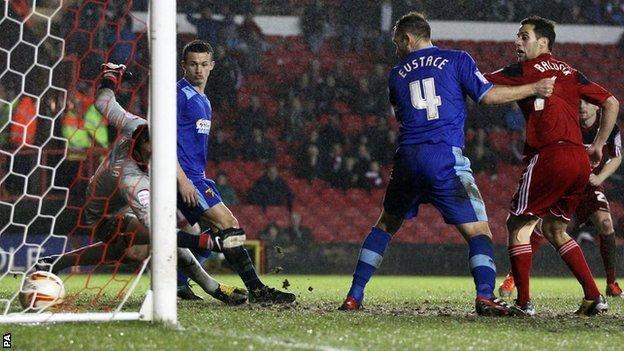 Bristol City kept a clean sheet for the first time since April 2012 and gained victory over Watford to move off the foot of the Championship table.

City took the lead through Greg Cunningham whose cross evaded everyone to find the back of the net.

And they doubled their advantage through Paul Anderson who struck after Marvin Elliott's knock-back.

Watford's best chance fell to Alex Geijo but he was unable to find the target with his stooping header.

The Robins have moved to within four points of safety in the league, while the Hornets suffered a setback in their hopes of claiming an automatic promotion spot.

City were looking for back-to-back victories for the first time since August and could have opened the scoring within the first five minutes but centre-back Liam Fontaine found his header well saved by former Arsenal goalkeeper Manuel Almunia.

Watford could then have gone ahead but missed two glorious opportunities. Firstly, Almen Abdi fired over the bar after Jonathan Hogg's purposeful run, before Geijo somehow headed wide after good work from Fernando Forestieri.

The hosts went ahead just before half-time when Cunningham scored his first goal in English football, as his delivery into the box missed everyone, including Almunia, and nestled in the bottom corner.

City had looked a threat from set-pieces all night and grabbed the second as substitute Elliott put the ball in the path of Anderson who converted with a low, first-time finish.

Abdi had a deflected effort late on but the City defence held firm to boost their hopes of survival.

"I've just organised them really. The previous game before I came in when they lost 4-0 to Leicester there wasn't much between the teams other than the goals.

"There was no lack of effort there, it was just tweaking it a little bit. They are a good group of players with a willingness to do well.

"You can speak about it but the players have to do it and their behaviour has been first class."

"Losing is part of the game. You win and do well like we have been recently and then you play a bad game like this.

"We are not a team who are going to be invincible and will win all the games.

"I think what is important is the reaction. Saturday we have a big game and I am expecting a good reaction from the players."