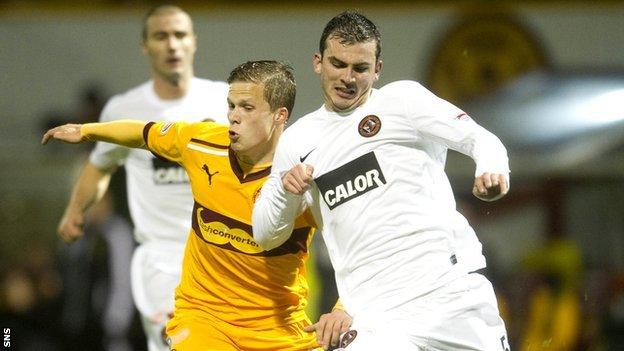 Motherwell's game against Dundee Utd was called off after heavy rain made the Fir Park pitch unplayable.

The match failed a 1745 inspection carried out by referee Stephen Finnie.

Motherwell chief executive Leeann Dempster said: "We gave it as long as we could - 1745 was as late as we could afford to give it to let people know.

"I was pretty confident that it was going to go ahead, but there's just one bit of the pitch we can't seem to get cleared at the moment."

She added: "We looked at three o'clock, called the officials and had an inspection at 1630 - at that point the weather was torrential but we knew it was clearing up and it would be windy.

"The rain cleared, the wind's up and the rest of the pitch has drained really well.

"We were confident it would be able to go but it's just beaten us this time."

Stephen Finnie, who was due to referee the Scottish Premier League match, explained how they tried to give the game every possible chance of being played.

"There was one problem area over on the right hand side when I was doing my first inspection," he said.

"When we went back on at 1745, on the area concerned before, the ball was not bouncing at all or running through it.

"So that becomes an immediate danger to the players and the game, so there was no option I'm afraid.

"When we took the teams over and showed them what the ball was doing there was no argument at all."

It may be that the clubs look into the possibility of playing the game on Wednesday, but rearranging the match within 24 hours could prove difficult.

Dundee Utd host Rangers on Saturday in the Scottish Cup fifth round, when new manager Jackie McNamara will take charge of the Tannadice side for the first time.