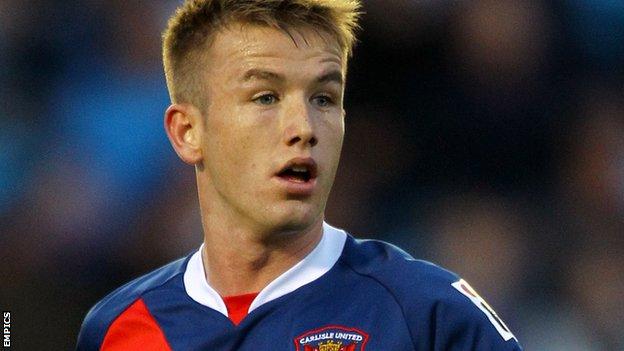 Paddy Madden scored twice as Yeovil moved to within three points of the top six with a vital win over fellow play-off chasers MK Dons.

Madden put the Glovers ahead midway through the first half, sweeping in from Kevin Dawson's pull-back.

The Dons drew level when Anthony Kay headed home Ryan Harley's corner, but the defender was then sent off for clashing with Madden off the ball.

And the Irishman made the numerical advantage count with his nodded finish.

Madden, who signed from Carlisle earlier in the month following a successful loan spell, now has 14 goals for the season and six in his last three games.

The result means Yeovil move up to seventh in the table, having won their last four matches.

MK Dons, who beat Premier League QPR in the fourth round of the FA Cup on Saturday, drop to ninth in League One.

"We knew that if we got the game on and won, we would find ourselves in the top seven or eight. We're now getting close to where we want to be.

"If Paddy Madden had scored three goals by now he still would have been a bargain. That gives you a clue that we didn't pay that much for him.

"He's great to have around. He's showing us week in, week out that he's a goal scorer."

"I got told by an official today that I'm too honest and my players are too honest.

"Shaun Williams almost got his leg broken in the middle of the park, jumped back up and hobbled around. There wasn't even a booking for it.

"Izale McLeod got punched - twice. Luckily for us we've got fantastic video footage of all the incidents.

"I need to make sure there's some charge on my battery for when I phone the PGMO (Professional Game Match Officials) - whatever their job is - but you have a go at them and you get yourself done."