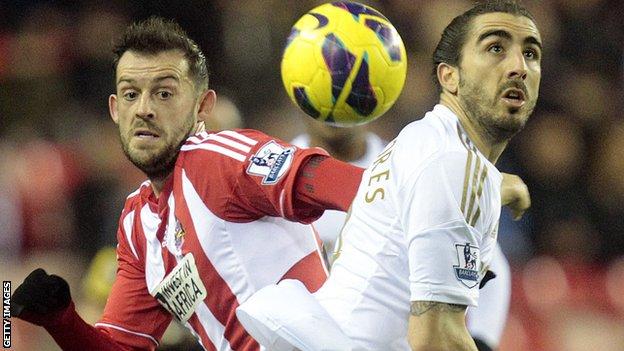 Sunderland and Swansea shared the points in a Premier League game short of excitement.

The visitors were the livelier side in the first half and had an early penalty appeal when Itay Shechter went down under pressure from John O'Shea.

Chico Flores almost scored at the near post but Simon Mignolet made an excellent reaction save low down.

The Swans should have snatched victory late on but Nathan Dyer shanked his shot wide from 10 yards.

If there was a suspicion the Welsh side might have their minds elsewhere after their League Cup heroics against Chelsea, there was little to vindicate it in an opening 45 minutes that Michael Laudrup's men dominated.

Sunderland - on a run of five wins in eight games - could not get the ball off the visitors, although the Swans' slick interchange passing regularly broke down against a Black Cats defence that had kept three clean sheets in their previous four home games.

The Swans had an early penalty shout when Shechter went over in a tackle with O'Shea, replays suggesting he was caught slightly, but referee Andre Marriner turned down his appeal.

Their best chance came when defender Chico Flores finally found some space in the box but his shot on the turn was palmed away by Mignolet low at his near post.

Sunderland finally woke up at the start of the second half but not to the extent that they troubled Swansea keeper Gerhard Tremmel.

And as the half wore on, it was the visitors who looked the more likely to snatch a winner.

Dyer went close with 10 minutes to go when Michu pulled the ball back into the winger's path but he blasted wide.

And substitute Danny Graham, a reported Sunderland target before Thursday's transfer deadline, could have stolen all three points in injury time.

Michu cleverly headed the ball down to him but Titus Bramble made a last-ditch tackle to block Graham's strike.

"It was really disappointing. We didn't create enough, we didn't exert enough pressure and we allowed them to dictate the pattern of the game.

"We're the home side and should do better.

"They came here with confidence after reaching the Capital One Cup final. That said, we won the last couple of games and played well last time we were here."

"After all that happened against Chelsea, going to the final, everyone in Swansea is talking about going to that final. No-one had spoken about Sunderland.

"It was very important for me to see how they reacted to that and I'm very pleased.

"First half we completely dominated, in an away game, against a good side. Clean sheet, a very good performance - that's great for me to say."