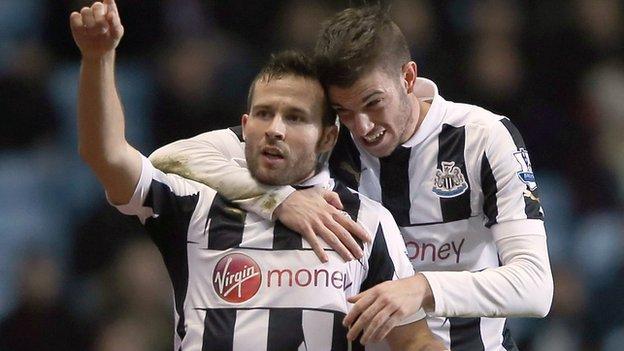 Newcastle United won the battle of the Premier League strugglers to deepen Aston Villa's misery and plunge them into the relegation places.

Paul Lambert's side - knocked out of the Capital One Cup and FA Cup by lower league opposition in the last week - paid the price for a dreadful first-half performance that allowed Newcastle to take control.

Papiss Cisse and Yohan Cabaye gave them a two-goal lead at half-time that proved too much for Villa to turn around, even with a vastly improved effort after the break.

Christian Benteke's penalty just after half-time established the platform for a Villa rally, but Alan Pardew's side held out for their first league win since mid-December.

Pardew will hope this win finally helps Newcastle find the sort of form that took them into the top five last season - but Villa are now deep in trouble and in desperate need of points and new faces to rejuvenate a side lacking confidence and inspiration.

This latest defeat means Villa have lost their last three home games in the league to fellow strugglers Wigan Athletic, Southampton and Newcastle - completing a sequence of only two points from their last seven league games since winning at Liverpool.

"Paul Lambert is in a situation where he's got to work with the players that he's got.

"He's got to get out onto that training pitch and develop a team, and get the best from these players.

"You can't give up on it, you don't sit around hoping for the right result, you get out there and put things together. That is the strength of a good quality coach.

"But at the moment the manager doesn't believe in the message he is giving to his players, because he keeps switching formations from one game to another.

"Keep it simple, and then the players might show a level of confidence and they might come through. There is still a chance for Villa. It is not over my any means."

Villa owner Randy Lerner has issued a public message of support for Lambert, but a more constructive course of action might be to try to make a breakthrough in the transfer market before Thursday's deadline.

Darren Bent was given a rare start alongside Benteke, but it was to prove another fruitless and frustrating evening for the England striker, who was removed after only 45 minutes.

Pardew started with two of his new signings, Moussa Sissoko and Yoan Gouffran, and the injection of fresh impetus was in evidence as Newcastle dominated the opening half.

Sissoko, in particular, was a major influence and produced a flash of creativity as Newcastle took the lead in the 19th minute. He split the centre of Villa's defence with precision and Cisse raced into the area to beat Brad Guzan with a clinical finish.

The best Villa response was a thunderous rising drive from Charles N'Zogbia that rattled the woodwork with keeper Tim Krul well beaten - but it was a rare moment of encouragement in a desperate 45 minutes.

And Newcastle doubled their lead just after the half-hour, Cabaye this time the scorer. He collected Ron Vlaar's poor headed clearance before sending a measured finish high past the stretching Guzan into the top corner.

The effect was instant, as Weimann brought a fine save from Krul and Agbonlahor was brought down by Mathieu Debuchy in the area. Newcastle clearly felt it was a harsh decision by referee Mike Dean, but he ignored their protests and Benteke sent Krul the wrong way with the resulting spot-kick.

Krul then saved well from Weimann as the momentum shifted back towards Villa in a manner that seemed barely possible at half-time.

Gouffran was replaced by Vurnon Anita, after a quiet debut, with 17 minutes left and Sissoko, who had faded after a fine start, was substituted by another new boy Mapou Yanga-Mbiwa six minutes later.

Villa thought they had got the equaliser as the game entered its last 10 minutes, but a combination of Krul and Jonas Gutierrez swept away Nathan Baker's downward header.

It was the last moment of real anxiety for Newcastle and the celebrations of their supporters at the final whistle illustrated the significance of this result.