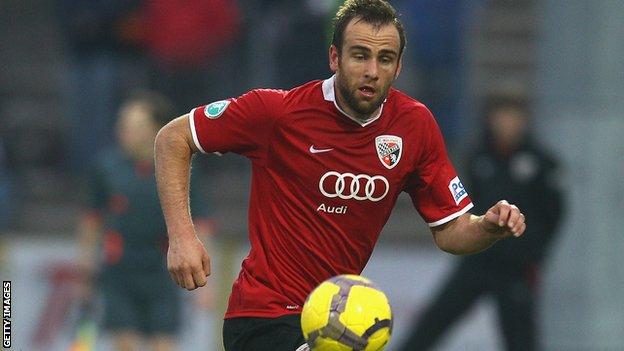 German striker Steffen Wohlfarth has signed a deal to join Ross County for the rest of the season.

The 29-year-old arrives in Dingwall from third-tier club SV Wehen Wiesbaden, having been in the reserve sides at Bayern Munich and Freiburg.

Midfielder Mark Corcoran has left the Highlanders with immediate effect after two-and-a-half years at Victoria Park.

The 32-year-old made four appearances in August before being hit by a groin injury and has only played once since.

Manager Derek Adams has brought in winger Ivan Sproule and defender Evangelos Ikonomou this month and is awaiting a work permit for Canada international Andre Hainault.

Sproule and Ikonomou both featured in the 4-1 win at St Mirren on Saturday, with the former scoring twice on his debut.

"Whilst we knew we had to add to the squad, it was important that it wasn't just numbers - anyone we bring in has to add something to what is a great group of players already at the club," explained Adams.

"We've had to cast the net far and wide to achieve that whilst working within our budget but with Ivan, Evan and now Steffen I think we've proved that it is certainly possible."