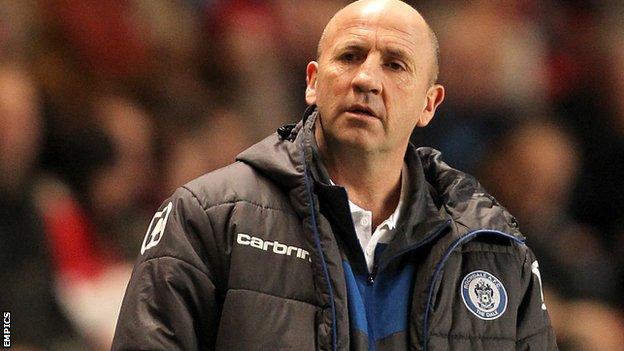 Chairman Chris Dunphy has said Rochdale are confident of naming a successor to John Coleman before the club travel to Cheltenham in League Two on Friday.

But Dunphy has refused to be drawn on speculation that former boss Keith Hill is set for a second spell in charge.

Hill, who was on 29 December, is strongly tipped to replace Coleman at Spotland.

"There are something like 60 or 70 managers out of work," Dunphy told BBC Radio Manchester. "We do hope to nail something down in the next 48 hours."

Rochdale have had two permanent managers - Steve Eyre and Coleman - since Hill's departure in June 2011.

"Because of things that have gone on in the past, one of the things I wanted to do this time was to make sure that we had a candidate that we wanted in position, should we decide to do this," added Dunphy.

Coleman, who ended his long association with Stanley to become Rochdale boss in January 2012, could not save the club from relegation to the fourth tier last season.

Dale have flirted with the League Two play-off positions for much of the campaign, but eight defeats in the last 10 league games resulted in Coleman's dismissal.

"Decisions like this are never easy because you're affecting somebody's life and career," Dunphy continued. "But there comes a time at a football club when you know things aren't going to go right and I'm afraid we had reached that stage at Rochdale.

"Nobody's defended John and Jimmy more than I have, but there comes a time when you think 'hang on, we've got to make a decision now' and it got to that stage.

"To give us the best chance to finish in the play-offs this season, I think we should change the manager now."