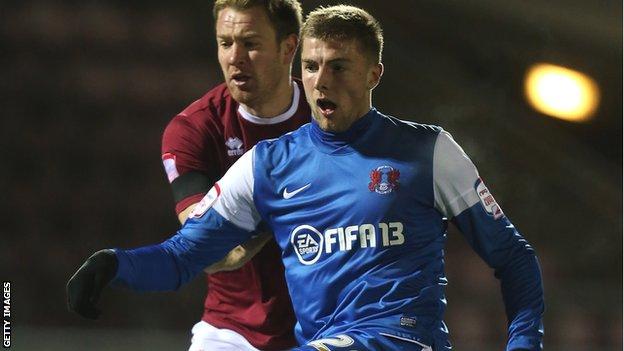 The 19-year-old failed to make a first-team appearance for the Potters but gained experience while on loan at Luton, Tranmere and Leyton Orient.

He scored three goals in 22 appearances during his five-month spell at Orient earlier this season.

John Ward's Rovers, who sit bottom of League Two, have been struggling for forward options this season.

Last season's top-scorer Matt Harrold is out for the entire campaign with a knee injury, while Derek Riordan and loanee Tom Eaves were not handed extended deals.

Ward told the club website: "I noticed him when I was at Colchester and he was playing for Tranmere, so I have known about him for about 12 months.

"He has also played for Leyton Orient, so although he is only 19 he does come with experience of the lower levels.

"He is a big lad and a line leader. He is what you would describe as an old-fashioned centre forward, and he has goals in him, which is obviously important.

"I have said before that I have strikers here who need some help over the next 19 games, and I think Ryan's presence can provide what we are looking for and take some of the pressure off."