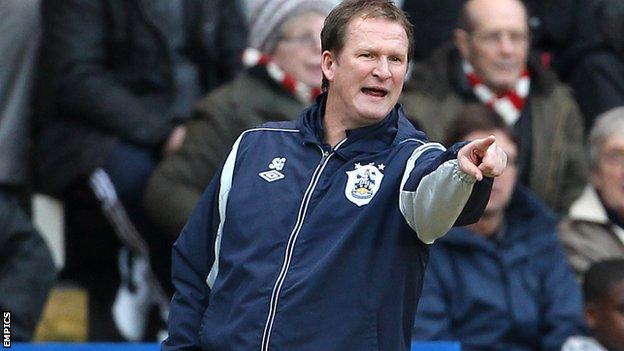 Huddersfield Town boss Simon Grayson has questioned the work ethic of his side after they extended their winless run in the league to 12 games.

The Terriers were beaten 4-0 at Watford on Saturday and have not won in the Championship since 10 November.

Grayson told BBC Radio Leeds: "We looked like we were feeling sorry for ourselves and you can't do that.

"The only thing that is going to get us out of this predicament is hard work on the training pitch."

He added: "When you look at the stats, as a team we are not working hard enough to stop the opposition.

"If you don't work harder than the opposition and they are good players then they will punish you.

"Believe me they'll be working hard to rectify this and if that means dropping one or two people then so be it. Reputations don't go before anyone at this club."

Huddersfield are now seven points above the relegation zone in 18th position, having been sixth after their last league win.

Despite his side's poor run of form Grayson is confident of turning the side's fortunes around.

The 43-year-old joined the Terriers last February and helped them to promotion from League One via the play-offs.

"You never know what is going to happen in football because Nigel Adkins was doing a fantastic job at Southampton and he got sacked," he continued.

"I'm not a quitter and I've been in positions like this before and I've come out the other side.

"We have a good group but it is a side that is new to this division and hopefully we can end the season in a good manner and make sure we are still in the Championship."

Meanwhile, Grayson confirmed that winger Danny Ward has a fractured metatarsal that could rule him out for up to eight weeks.

The 21-year-old has not featured since the 1-1 draw at Crystal Palace because of a knee injury.