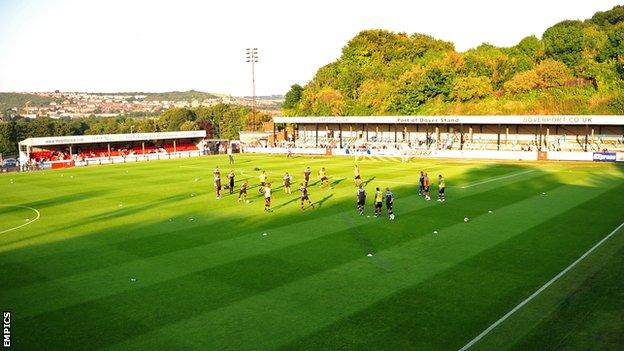 Kinnear, who was in charge of the club from 1985 to 1995, returned to Crabble at the weekend after Nicky Forster was placed on gardening leave.

"We've got a good bunch of players there and we have just got to get them going again," he told BBC Radio Kent.

"There is no God-given right but that's what the plan is. It's nice to come to a club that has great expectations."

Kinnear, who joins from Margate and will be assisted by former Dover defender Jake Leberl, added: "The idea is to get into the Conference.

"The way it is set up, there is no reason they can't follow the likes of Stevenage and Crawley.

"It is professional enough to be able to do that, you just have to get a side to do that. It's mouth-watering, really."

Former Reading and Brighton striker Forster was relieved of his duties on Friday afternoon with the side third in the Blue Square Bet South table, having taken 40 points from 25 matches.

Dover chairman Jim Parmenter says that he had to act after a run of five straight defeats.

"We were clearly not happy with the situation the club found itself in," Parmenter told BBC Radio Kent.

"We had a board meeting on Friday where we took a decision to change the manager situation.

"We were on a losing streak and the manner of those losses were such that the board, to a man, were so concerned about the situation we felt we had to take the action that we did.

"Everybody knew what the targets were at the beginning of the season and there has been a lot of money invested to make it the year that it [a promotion challenge] happens."

During his previous 10-year stint in charge at Crabble, Kinnear led Dover from the Southern League to the top tier of the non-league pyramid.

He left in 1995 and then spent 10 years in charge at Margate, whom he also led to the Conference.

Since re-joining Margate in 2011, he has managed to established the club as promotion contenders in the Ryman Premier Division.

But he says he felt he had to take the opportunity to return to Dover.

"It came out of the blue," Kinnear continued. "I got a phone call from Jim, who asked if I was interested and we spoke about it.

"It's difficult with Margate. I've got a big affection for them but everything is in place at Dover for them to be a big club like it was once.