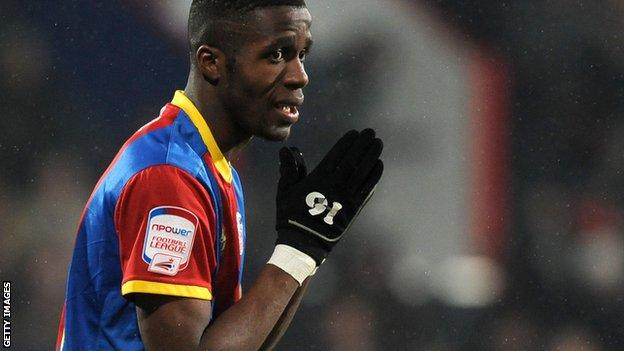 Manchester United and Crystal Palace will hold further talks in the next 24 hours as they work towards concluding a deal for England winger Wilfried Zaha.

Sir Alex Ferguson has remained behind as his squad travelled to Qatar on Sunday for a short training camp.

United are understood to be willing to pay £12m for Zaha and will then loan him back to the Championship club for the rest of the season.

Both clubs have refused to comment on a proposed deal for the 20-year-old.

But an agreement could be reached by the end of the week for a player who won his first England cap against Sweden in November.

Zaha, who came through the youth academy at Selhurst Park, has scored 15 goals in 124 appearances for the Eagles since his debut against Cardiff in March 2010.

He was named the Football League Young Player of the Year last season and attracted the attention of a host of Premier League clubs.

Arsenal manager Arsene Wenger had said he was "looking at Zaha" but today insisted a bid was never made.

"We were never in for Zaha," Wenger said.

Palace are fourth in the Championship - two points off the automatic promotion places - and losing Zaha could be a blow to their Premier League ambitions.

The chances of him being loaned back to Selhurst Park are hampered by the fact that the Ivory Coast-born forward is eligible to play in the Champions League, although he is cup-tied for the FA Cup.

Zaha has been with Palace since the age of 12 and is the latest home-grown talent, following in the footsteps of Chelsea's Victor Moses and Southampton's Nathaniel Clyne.

Former Eagles striker Mark Bright has described Zaha as the biggest talent to emerge at the club since former England striker Ian Wright.

"He is probably the best prospect we [Palace] have had in terms of what he could go on to achieve," said the BBC pundit.