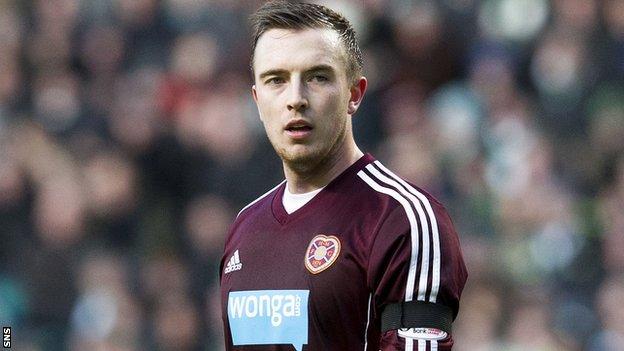 Scotland defender Danny Wilson insists he is a better player following his move to Liverpool despite limited opportunities at Anfield.

The 21-year-old made his Hearts debut on Saturday after moving to Tynecastle on loan for the rest of the season.

This follows temporary spells at Blackpool and Bristol City.

"I haven't played as much as I'd hoped but the move served its purpose," he said. "I left to become a better player and I feel I have done that."

Liverpool paid Rangers £2m for Wilson in July 2010 after the centre-half had played 26 first-team games.

However, he has made just nine appearances for the Reds and has not featured at all this term under manager Brendan Rodgers.

"I don't regret it [leaving Rangers]," he explained. "I made the decision and I stand by it.

"I've been playing against better players in training, guys like Luis Suarez, and you can only learn from that.

"I just want to put that into practice in games now."

Despite playing just once while on loan at Bristol City, Wilson was thrust straight into the Hearts team for the 4-1 loss at Celtic Park, replacing suspended captain Marius Zaliukas.

"I was happy to get a game straight away," he said.

"I've not played a lot of football recently, so I'm not thinking too much about the future, just the here and now."

Wilson, capped five times, is out of contract in the summer and concedes that it is unlikely that he will be staying on at Anfield.

"It's going to be difficult for me to have a future at Liverpool," he admitted. "They have four centre-halves battling for two places.

"I haven't been able to force my way in.

"Right now, I'm just happy to be here at Hearts. I've been given an opportunity and I need to take it."

Asked if he would consider joining the Tynecastle club on a permanent basis, he replied: "I don't see why not.

"I need to do well first and foremost. I can't just come here and think I'm going to be here for the next few years. I need to earn that right."

Wilson, who can also play at left-back, could link up again with Liverpool team-mate Michael Ngoo, 20; one of several strikers on a list of potential loan signing targets for Hearts.

The Tynecastle outfit, who are assessing other options at English Premier League and Championship clubs, are only able to sign under-21 players until the end of the season and are also restricted to registering players on a one out, one in basis.

But a wage has been freed up by goalkeeper Peter Enckelman's departure at the beginning of January.

"Michael is a good player, he just needs time on the pitch," said Wilson.

"If he came here, he would benefit Hearts."