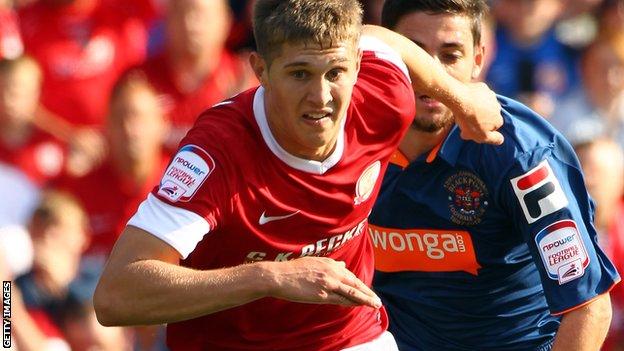 Barnsley manager Dave Flitcroft has insisted that England Under-19 defender John Stones will not be sold on the cheap during the transfer window.

Flitcroft, however, values him at close to £3m and said any transfer deal would have to see the 18-year-old loaned back to Barnsley for the rest of the season.

"He is one of the best prospects in the land," he told BBC Radio Sheffield.

"It's important we make sure that if a deal is done that we can keep him for this season because he is developing as well.

"John's learning, John's developing. Is it right that another manager wants to move in and just put him in a reserve team or (under) 21s team? I don't think it is.

"The club are realising that possibly some some of the valuations out there are a little bit disrespectful and derisory to John's ability.

"The valuations that we're hearing reported is probably half what the kid's worth. They don't need to sell him for an under-score price."

Stones made his first-team debut towards the end of last season and has so far made 26 appearances for the Oakwell club, as well as winning two England U19 caps.

Asked what he thought Stones was worth, Flitcroft replied: "It'd be easy for me to say £3m, getting up to that figure. It might sound pricey but we're talking about one of the best (young) defenders in English football at the moment."

Meanwhile, Barnsley midfielder Stephen Dawson will be out of action for four to eight weeks after suffering an ankle injury early in Saturday's 1-1 draw at Ipswich.

"It's better than we first thought, we were really worried that there could be a break in his ankle.

"He's had a scan on it and it's bad ligament damage," added Flitcroft, who may now look to bring in a midfielder as cover and is also considering an offer to striker Jason Scotland, who was released by Ipswich on Monday.