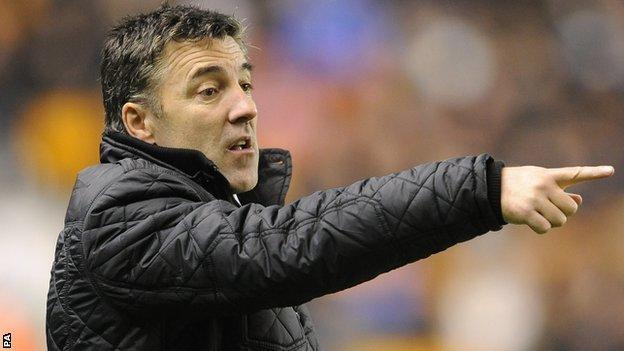 Wolves boss Dean Saunders says if his team can get some belief back then he may not need to add to his squad.

After the sacking of Stale Solbakken, new boss Saunders has led Wolves to draws in his opening two games.

"I think these players are good, they've just had the stuffing knocked out of them," Saunders told BBC WM.

Without a good attitude, we've got a player in our club playing for himself and not for the team. Nothing is more important than the club

"If I can get the belief back in them, I'm sure you'll see some of those players playing like they can play, and we won't need to sign anyone."

Following their relegation from the Premier League last campaign, Wolves currently lie 17th in the Championship, seven points above the relegation zone having only won one in their last seven league games.

However Saunders is cautious about adding more players to an already sizeable squad at Molineux.

"What I don't want to do is just panic buy and bring players to the club that are not as good what we've got," the former Wales international said.

"I have to look carefully and make sure I bring the right characters into the club. It's very difficult to know how players are going to react when you sign them.

"You can only go by what you've seen and asking managers they've played for if they've got the right attitude.

"Without a good attitude, we've got a player in our club playing for himself and not for the team. Nothing is more important than the club.

"The club will still be here when we are all gone. The team serves the club and the players serve the team."