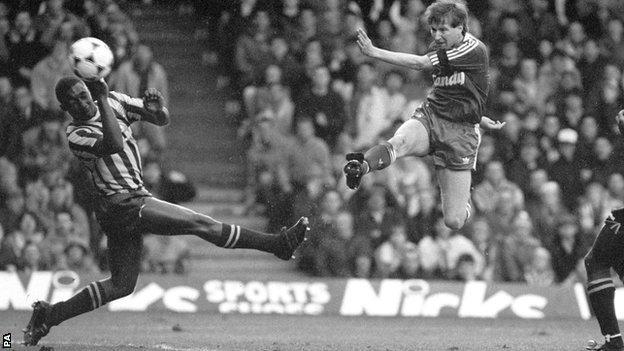 Former Brentford manager Steve Perryman says the Bees should take giant-killing inspiration from League Two side Bradford City's run to the Capital One Cup final when they face European champions Chelsea in the FA Cup fourth round on Sunday.

Exeter's director of football was in charge of the Bees when they faced the might of Liverpool the last time they reached the FA Cup quarter-finals in 1989.

Brentford have reached the FA Cup quarter-finals four times, the last occasion being in the 1988-89 season when they were beaten 4-0 by reigning Division One champions Liverpool at Anfield.

Martin Allen guided the Bees to FA Cup fifth-round appearances in 2005 and 2006 where they lost to Premier League sides Southampton, after a replay, and Charlton Athletic.

This is the first season in six since that Brentford have got beyond the third round - and in all but one of the other seasons, they have not even got that far.

Chelsea and Brentford have only met once before in the FA Cup, with the Blues winning the tie in 1950 by a 1-0 scoreline.

The Bees beat a Premier League team on their last appearance in the fourth round, overcoming bottom of the table Sunderland 2-1 in 2006.

A Reds side with John Barnes, Peter Beardsley, Steve McMahon, Ronnie Whelan and Ray Houghton at the peak of their powers ultimately cruised to a 4-0 win at Anfield,

But Perryman's Bees, then, like now, a side in the third tier of English football, had their opportunities early on and he was proud of the way his team handled themselves and the occasion.

"I think Richard Cadette had two good chances," said Perryman, who skippered Spurs to their FA Cup wins over Manchester City and QPR in 1981 and 1982.

"Of course I am a bit biased, and maybe a quarter or a half-chance becomes three quarters of a chance - but we could easily have gone ahead.

"I always thought the first goal was so vital. Liverpool were a great side but I felt they could be vulnerable early on and could be slow starters.

"We had the first chance early on but didn't take it, and although we didn't live with them in the end, we didn't go there to defend and gave it a really good go."

Giving it a good go is exactly what Perryman feels Uwe Rosler's League One promotion hopefuls need to do against an under-pressure Chelsea side who have struggled for consistency since making a blistering start to the season.

And while, like that day at Anfield, the odds are stacked heavily in the top-flight side's favour for the first competitive west London derby between the two sides since 1950, Perryman says any FA Cup underdog must be full of belief.

"Don't tell me you can't get a slip in the box and a lucky break. It's possible," said the Spurs legend, who also won two Uefa Cups and the League Cup twice during his time at White Hart Lane.

"The longer the smaller team are level, the better their chance - and it only takes a defensive error or a great delivery from a set-piece.

"There will be a great atmosphere at Griffin Park and that probably lifts the smaller team more than the big team because Chelsea will be used to it.

"There are no mugs in the lower divisions now. They are all fit, they will have a spring in their step and they can cause an upset."

Perryman was Bees boss for three and-a-half years from 1987, and he believes that cup run - which involved seven games just to reach the quarter-finals - did wonders for their belief.

Brentford are not an up-and-under, blowing-the-bugle type team. But actually that will probably suit Chelsea more

A squad featuring Andy Sinton, Tony Parks, Neil Smillie, Keith Jones, Gary Blissett and Cadette had to win two replays and beat three higher-division clubs in Manchester City (who won promotion to the old Division One that season), Blackburn Rovers and Walsall to set up their dream tie at Anfield.

It did come at a cost though.

"Unfortunately, playing all those games hampered our league progress a bit that season," Perryman said. "We were in a good position for promotion and it didn't quite happen. You get involved in so many games there has to be a focus taken away.

"But I think it was the prelude to getting promoted under Phil Holder in 1992. That Cup run gave the team such confidence that we could be on the same pitch as the big boys. It was a wonderful experience.

"Sinton got sold on the back of that game [to QPR]. He was obviously a good player but showed he could handle it with the big boys."

Brentford are currently third in League One, where they have only lost four times all season. Their defeat by Tranmere Rovers last Saturday was their first at Griffin Park since August and up front they have Clayton Donaldson, who has scored 19 goals in all competitions so far this term.

But Chelsea legend Ron Harris, who played 795 games for the Blues before taking up a player-coach role with Brentford in 1980, cannot see an upset despite being impressed with the Bees when he saw them beat Southend to tee up the Chelsea tie.

Chelsea were beaten 4-0 by Barnsley in the FA Cup third round in the 1988-89 season but went on to win the old Division Two title.

The Blues reached their first FA Cup final in 24 years in 1994 but were brushed aside 4-0 at Wembley by a Manchester United side who clinched the double with that emphatic victory.

They have won the FA Cup in four of the last six seasons, and have appeared in six of the 13 finals this century.

"They looked a half-decent side," Harris told BBC Sport. "Rosler has got them playing some decent football.

"Brentford are not an up-and-under, blowing-the-bugle type team and they played it around pretty well. But actually that will probably suit Chelsea more.

"It's a fantastic tie for Brentford. You get upsets every year but I just cannot see it in this game.

Notts County coach Colin Lee, a former Chelsea and Bees player, has been impressed with League One rivals Brentford this season, but cannot see an upset despite the turmoil at Stamford Bridge and the supporters' anger at Rafael Benitez's appointment as manager.

"Chelsea will put out a very strong team. Brentford deserve that but I think Chelsea will have too much for them," he said.

Lee joined Brentford from the Blues in 1987 and combined playing duties with a first foray into management as a youth team coach.

And although he was not involved in the game at Anfield, he was still on the playing staff and fondly recalls his spell with the Bees and the excitement that Cup run created.

Bees and Blues: 10 players who have represented both clubs

"It's a great club," Lee said. "I had a fantastic couple of years there. They were good times and good people and some of those people are still involved.

"The fans will remember this game for a long time. The Liverpool game created a real buzz and the local element will add that extra buzz this time.

"It will be fantastic for the whole area. There is nothing better than playing a local FA Cup derby against the European champions. What more can you want?"