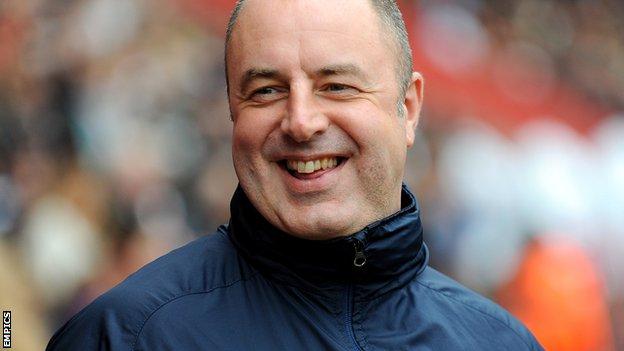 Keith Hill has returned for a second spell as Rochdale manager, replacing John Coleman, who was sacked on Monday.

The 43-year-old is back at Spotland just to become boss of Barnsley.

with the Tykes struggling in the lower reaches of the Championship.

He enjoyed a successful first spell as Dale manager, winning promotion to the third tier in 2010 and then equalling their best ever league finish.

Hill, who has agreed a deal until the end of the season, told the club website: "When the club approached me about coming back to Spotland, I didn't hesitate.

"Rochdale Football Club will, and always will remain dear to me, and to be honest it was a no-brainer.

"I'll be here until the end of the season and we will take stock of the situation then.

"Until then, we have an 18-game season to think about, to plan and to achieve so that's what I, the players and staff will be doing.

"We also need the fans to get behind us and give us all their support. That is crucial if we are going to go forward. I'm delighted to be back and cannot wait to get started."

Hill's first game at the helm will be at Cheltenham on Friday.

Chairman Chris Dunphy added: "This is not a position we, as a club, would have liked to have found ourselves in, but after a recent run of poor form it was

"I am delighted that Keith has decided to take the job and I am confident in his experience and his ability to work and develop our current squad."

Dale are 14th in League Two, having lost eight of their last 10 matches.