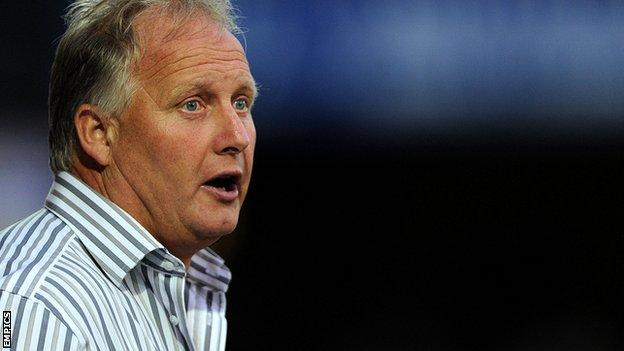 Manager Kevin Blackwell has insisted he will not walk away from Bury, despite being linked with other clubs while the Shakers were under a transfer embargo.

He told BBC North West Tonight: "I've been shortlisted for jobs but I haven't gone because I think this club needs a captain at the moment.

"I won't walk away unless something else happens that's out of my control."

Blackwell, who previously managed Leeds, Luton and Sheffield United, added: "The people I work for here have been very supportive, the players have been terrific and I'm enjoying the job."

after the League One strugglers received a short-term loan from the Professional Footballers Association to solve a cashflow problem.

Current position: 22nd in League One

The loan was repaid in full last week, meaning Blackwell has been able to dip back into the market for new players.

He has been able to add for the rest of the season, while winger Gregg Wylde and striker Troy Hewitt have returned to Bolton and QPR respectively at the end of their spells.

Blackwell admitted that the embargo had been a frustrating time for him.

"Fortunately for us, no transfers could come in or out anyway for most of it," he said. "But we identified six or seven players and they've already gone before we get the chance to have a go at trying to bring them to the club."

His hopes of bringing in more fresh faces during the January window have been further hampered by the recent cold snap, which has resulted in home fixtures against and being postponed because of a frozen surface at Gigg Lane.

Blackwell, who was continued: "When you want something to happen, it never seems to happen. When you want to win that lottery, it never quite comes in, and that's the way it is for us at the moment.

"That's the one thing about managing at this level - you really have to rely on all your skills that you've learned over the years. Let me tell you, it's a test."