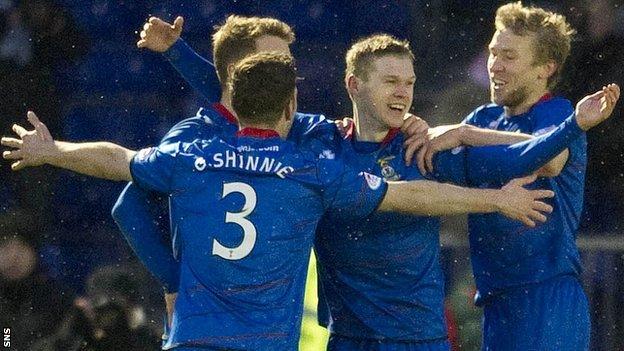 Inverness manager Terry Butcher says reaching the final of the Scottish Communities League Cup "would mean everything" to the club.

The Highlanders take on Hearts in Saturday's semi-final at Easter Road.

And Butcher feels guiding Inverness to their first final in the tournament would top his managerial achievements.

"What would you feel like if you won a semi-final? We want to have that feeling on Saturday," Butcher told BBC Scotland.

"How they've made it happen [reaching the semi-finals] is because of their hard work and what they put into games as well.

"They don't hold back. They give me and the club everything and there's no reason to change that on Saturday."

Butcher insitss he'll treat the game "like any other match".

"The players have got themselves into this strong position. The more successful you are, the more games you win, the more semi-finals and finals and quarter-finals you will play in.

"They're pretty much used to a high league position. We're used to making progress in the cups as well and we want that to continue."

The former England captain says Inverness have been inspired by the cup success of local rivals Ross County in recent times.

"I look at Ross County's great effort and great achievement in getting to the Scottish Cup final [in 2010] when they lost to Dundee United," he added.

"They beat Celtic on the Saturday [in the semi-final] in the early kick-off, we were at Queen of the South in Dumfries in our First Division days. We managed to win our match in the afternoon but Ross County's success inspired us.

"A lot of the players have been in that position before. [Assistant manager] Maurice [Malpas] and myself and Richie Foran were at Easter Road when [our former club] Motherwell beat Hearts in the semi-final of the League Cup a good few years ago.

"We've got previous there and we certainly enjoyed that and we hope history repeats itself."