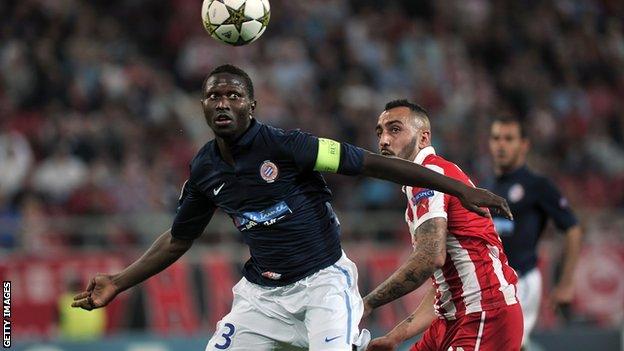 Newcastle United have signed defender Mapou Yanga-Mbiwa from French side Montpellier for an undisclosed fee, believed to be about £6.7m

The 23-year-old France international has agreed a five-and-a-half-year deal at St James' Park.

He said the threat of relegation hanging over Newcastle, who are 16th in the league, is not a concern for him.

"While we're not in an ideal position, I think we can definitely finish in the top half of the table," he said.

The centre-back added: "In the long term people talk about the top four in the Premier League. I think with the players we have got on board and the manager and his ideas, we can definitely close the gap, get in the top six and, in the long term, why not challenge for the title?"

Yanga-Mbiwa also said the fact there were already several French players at the club - including internationals Yohan Cabaye, Mathieu Debuchy and Hatem Ben Arfa - made it easier for him to make the move to St James' Park.

"The way the club has welcomed French players was a very big part of my decision," he continued.

"There are several here and that is something that will definitely help me settle in more quickly."

Yanga-Mbiwa captained Montpellier to their first Ligue 1 title last season and made more than 200 appearances for the club.

Manager Alan Pardew added: "We needed to strengthen the team and bringing in Mapou will give the whole squad a boost.

"He is precisely the sort of player we've been looking to bring to the club."

Two more French players, Bordeaux forward Yoan Gouffran and Massadio Haidara from Nancy, are set to join him on Tyneside.

Gouffran, 26, wrote on Twitter on Tuesday: "Tomorrow I will be a new player of Newcastle and I am proud. Thanks to everyone."

Haidara's club Nancy stated on their website that the 20-year-old was to also sign for the Magpies.