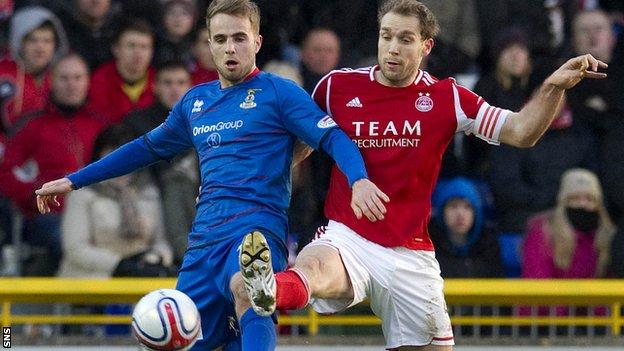 Inverness forward Andrew Shinnie has admitted he's honoured to be linked with a move to fellow Scottish Premier League side Aberdeen.

But the 23-year-old insists he may still stay with the Highland club.

"Obviously it's a great compliment a team as big as Aberdeen and their manager does like me," said Shinnie.

"But as far as thinking I'm going there, that's not on my mind right now. I'm happy where I am in Scotland and I'm happy at the club."

And speaking on his contract offer from Inverness, Shinnie added: "No, I haven't made that decision.

"I think maybe people reported it a bit wrong. I haven't rejected it.

"I just asked the manager for a bit more time to fully be convinced in my mind what I want and not to maybe rush into a decision and then think I'll regret it."

Shinnie, who signed from Rangers in July 2011, is Inverness's second-top scorer this season with 12 goals.

He is the first player from the club to have won a full Scotland international cap, coming on as late substitute in November's friendly win over Luxembourg.

His manager Terry Butcher still has high hopes of Shinnie staying at the Caledonian Stadium.

"He's probably looking at who we're going to re-sign as well as to what he does.

"But he's playing it very sort of steadily, he's having a look and seeing what the situation is.

"I'm still confident that he'll re-sign, I think he needs to play here for another year."

Shinnie's brother, Graeme, also plays for Terry Butcher's side and signed a new contract in December.

But if Andrew Shinnie did make the move to Pittodrie, he would follow in the footsteps of Jonny Hayes, who joined Aberdeen from Inverness in June.

"[Aberdeen manager] Craig Brown was very good last year and told us about their intention to talk to Johnny Hayes," added Butcher.

"But thankfully there's been no phone-calls about Andy Shinnie.

"But he can do that or speak to his agent, I'm not bothered about that.

"We've made our pitch and I'm sure we can reach a successful conclusion when it comes to terms.

"The ball's very much in the Andy's court."