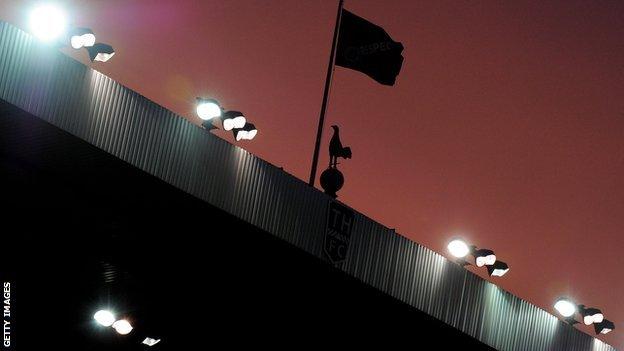 Tottenham have announced a loss of £4.3m for the 2011-12 financial year, primarily due to the absence of Champions League football.

Chairman Daniel Levy said: "We are ever ambitious for the club, driving all areas of the business."

Spurs did not qualify for the Champions League again this season but currently sit fourth in the Premier League.

The figures also revealed that commercial revenues continued to increase but merchandising fell by four per cent as the club made a loss of £1.6m before interest and tax - down from a £1.4m profit the previous year.

Spurs are on course to comply with Uefa's financial fair play rules and said they supports its further integration into the Premier League.

The club said they have completed the first step towards building a new stadium adjacent to White Hart Lane, which will increase revenue due to a greater capacity.

This season they have also moved to a new training centre in Enfield, which they hope will help them by nurturing home-grown talent.

"Our focus continues to be the delivery of an increased capacity stadium," added Levy.

"There is much work to be done refining the detailed design and resolving the final development issues.

"We intend to deliver this to the same high standards of the new training centre and to reward our incredibly loyal supporters with a world class stadium and one that will have made a crucial contribution to the regeneration of a priority borough in London."