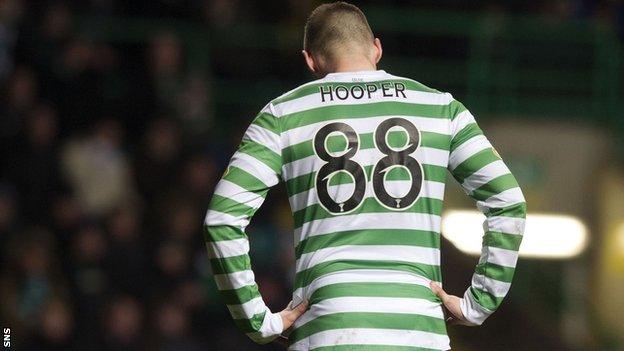 Celtic manager Neil Lennon is sure Gary Hooper will remain at the club and sees no reason why the striker would leave in the January transfer window.

"He will be a Celtic player come 1 February, I'm pretty sure about that," Lennon told BBC Scotland.

"I don't see any reason why he should be in a rush to go just yet and I don't think he wants to."

And the manager added: "He's one of the best players of his age in Britain at the moment.

"I think he's just getting better and his performance [against Dundee United] again was of a fantastic level.

"He's just a great player and we want him here.

"He enjoys it, he knows the environment, he's well respected by the players and he's enjoying his football at the minute."

Hooper, for whom Norwich have had two bids rejected, scored either side of half-time in Celtic's comfortable win against United, with Victor Wanyama and Scott Brown adding the other goals.

Georgios Samaras captained the side until Brown came off the bench and the Greek striker was praised for his performance, which included assists for each of Hooper's goals.

"He's an amazing player and he's a talent," added Lennon.

"He's got a boundless amount of energy and just keeps going right until the final whistle.

"We made him captain because he's been here the longest outside of Scott Brown. He's been a real leader on and off the park.

"I thought his performance deserved a goal and going forward we were breathtaking at times.

"We looked really in the mood and Dundee United caught us on a very good night."