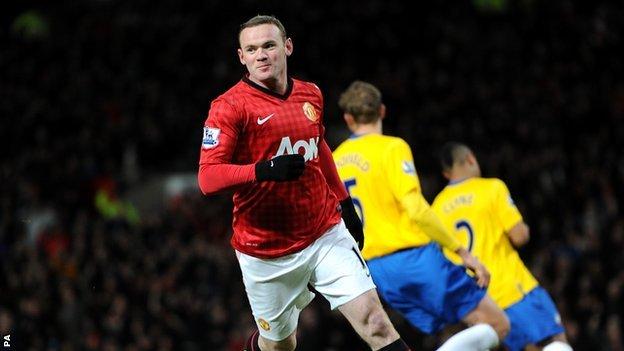 Wayne Rooney scored twice as Manchester United opened up a seven-point gap at the top of the Premier League with a comeback victory over Southampton.

Rooney's first-half double put United in control after calamitous defending had led to Jay Rodriguez's third-minute opener for the visitors.

Although the hosts threatened to overrun the Saints before the break, Mauricio Pochettino's side recovered well in the second half, pressing their hosts from the front.

Rickie Lambert could even have equalised as his accurate shooting twice tested David de Gea, although Robin van Persie was also denied by Artur Boruc and had another effort ruled out for offside.

An open and intriguing contest, this was another example of United being saved by their attack and, while they ultimately took advantage of neighbours Manchester City's failure to win at QPR on Tuesday, there will again be questions about their defending, particularly with Real Madrid visiting soon in the Champions League.

Defeat for Southampton ended a six-game unbeaten run, although there were signs of a tactical adjustment to the team from Argentine coach Pochettino, in his second game since replacing Nigel Adkins.

The 40-year-old was certainly true to his pre-match word in going for a win at a venue where Saints have not succeeded in 25 years.

Having earned a draw and a clean sheet in his first game against Everton, Pochettino's start to Premier League life looked even rosier within three minutes as Rodriguez capitalised on Michael Carrick's poor backpass and nipped in ahead of the stranded De Gea to put the Saints in front.

It was a shocking goal to concede and the 12th Premier League game in which United have gone behind this season.

"Southampton worked and worked, they played really well but it's 12 games unbeaten for Manchester United. And most importantly in the numbers game, the gap over Manchester City at the top is back to seven big points."

But, as on the eight other occasions when they have turned a deficit into victory, they recovered quickly. Within six minutes they were level.

The ball fell to Kagawa 35 yards from goal and he threaded a pass to Rooney, who calmly passed the ball into the net past Boruc.

It was a breathless start to the game, with United committed to attack in a 4-2-4 formation, and they could easily have scored twice before they finally got their second goal before the half-hour mark with Kagawa also hitting the post.

Van Persie returned to the side after sitting out the FA Cup win over Fulham and caused havoc with a succession of fizzing free-kicks. From one of them, just before the half-hour, the Dutchman sent the ball to the back post where Patrice Evra nodded it back for Rooney to tuck in from a yard out.

Danny Welbeck and Van Persie could have added further goals before the interval, and with Southampton also throwing men forward, there was no shortage of space.

The introduction of Adam Lallana and Steven Davis brought a measure of control to the visitors' midfield after the break and Lambert, quiet to that point, twice gave De Gea something to think about with long-range shots.

The hosts endured a slack spell, giving the ball away several times and De Gea fumbled another Lambert effort.

It was enough to get Ferguson off his seat and he eventually brought on Rio Ferdinand to replace the struggling Chris Smalling.

Van Persie might have had cause for complaint after his header from Rooney's cross was ruled out for offside, but the hosts and their supporters were relieved enough to hear the final whistle as Southampton ended the game strongly.

Manchester United boss Alex Ferguson told BBC Sport: "[Winning] is the name of the game at this stage of the season.

"For the first 30 minutes I thought we were fantastic, we played really well. But in the second half Southampton have been the best team to play here this season.

"We were fortunate to win the game. They pushed on top of us and didn't give us any time on the ball."

Southampton boss Mauricio Pochettino, speaking through a translator, told BBC Sport: "I'm very proud [of Ferguson's praise]. It's very important for my players to hear. But we leave with no points. We did play well but I'm upset at not getting a draw at least. It doesn't console me.

"I think in the second half we played as we should have done for the whole game. I think it's important for the team to know we can play that well."