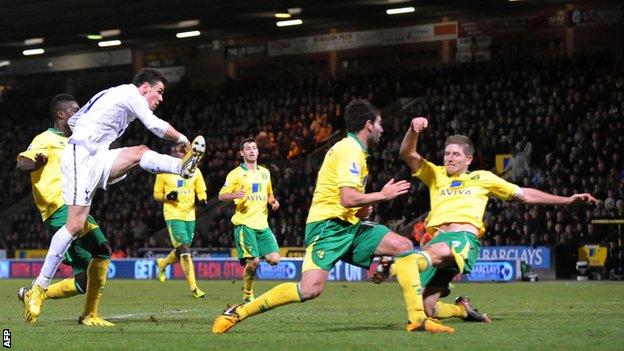 Tottenham's Gareth Bale broke from his own half to score a stunning solo goal and deny Norwich victory.

The Canaries were much improved from their humbling FA Cup defeat by non-league Luton and went ahead through a well-worked Wes Hoolahan effort.

Sebastien Bassong was inches from doubling the lead before Spurs finally threatened through Jermain Defoe.

The visitors were the better team after the break and Bale finished expertly after a 60-yard dash to earn the draw.

Champions League-chasing Spurs were unbeaten in seven games, while Norwich had slid towards the Premier League relegation zone after taking one point from the previous 18 points available.

However, City, who held Spurs at White Hart Lane in the Premier League earlier this season and beat them in the League Cup, edged a scrappy start.

The swirling wind at Carrow Road was causing problems for Spurs and goalkeeper Hugo Lloris had to tip a header from Grant Holt around the post after Michael Dawson failed to deal with a cross.

That was a sign of things to come and the breakthrough for the Canaries came when Hoolahan put them ahead from six yards.

The Spurs defence was absent as Snodgrass's deep centre found Holt, who nodded back to Anthony Pilkington, with the winger then showing excellent composure to pass to the well-placed Hoolahan.

At that stage, there was a real lack of energy from the pedestrian north London side, a state of affairs not matched by their opponents.

In December, only Spanish heavyweights Barcelona had enjoyed a longer unbeaten run than Norwich, but the Canaries have taken just two points from the last 21 points available in the Premier League

The contrast in industry was exemplified when centre-back Bassong was denied a second goal for Norwich from two yards after he was edged out when he followed up his own pass from the halfway line.

Bassong was then saved by the fingertips of his goalkeeper Mark Bunn just before the interval after he was caught in possession by Defoe for the visitors' first effort on target.

Norwich had conceded 11 goals in their last four league games and there were signs of Spurs slowly trying to probe that weakness after the break.

Bale - who mostly operated in the middle of the pitch - forced a decent save from distance before Defoe blazed over after dribbling past Russell Martin.

Tottenham finally began to build some sustained pressure but were unable to pick a gap in the massed Norwich defence.

Manager Andre Villas-Boas handed German playmaker Lewis Holtby a debut from the bench but it was a moment of razor-sharp incision from Bale that saw them draw level.

There seemed to be little on when the Welshman received a lay-off from Defoe inside the centre-circle but he put on the after-burners to race to the edge of the Norwich area.

Full-back Javier Garrido was then bamboozled with a mesmerising step-over before he stroked home with the outside of his boot.

It was yet another stunning goal from a remarkable player.

Buoyed by Bale's brilliance, Spurs pushed for the win that would aid their bid for Champions League qualification.

The momentum was now with them and substitute Gylfi Sigurdsson saw his rasping shot superbly tipped round the post by Bunn to ensure a draw.

"Until Spurs scored, I thought we were good value. They did cause us problems and had good possession and our goalkeeper Mark Bunn made a super save, but apart from that, they had limited good chances and we were always a threat.

"We have a great support and it was important after Liverpool and Luton that we put on a performance.

"We were better today, we have had some misfortune lately, but if we continue like this, we will be OK."

"He [Gareth Bale] got lucky [in the build-up to his goal] that Alexander Tettey did not break his ankle when he was running to score, I think it was a yellow card or probably a red card to give. But moving on, it was a great goal, with such pace and power.

"In the first half we were not as good as we can be, in the second half, we really put on a show to level the game. It was a pity as it was three points I think we wanted to win and move forward to profit in some way from the Arsenal and Liverpool game.

"The boys recognised they were not themselves in the first half, so they showed great commitment in the second half to come out strongly. Their commitment was excellent and I think it should serve as an example for what we want to do moving forward."