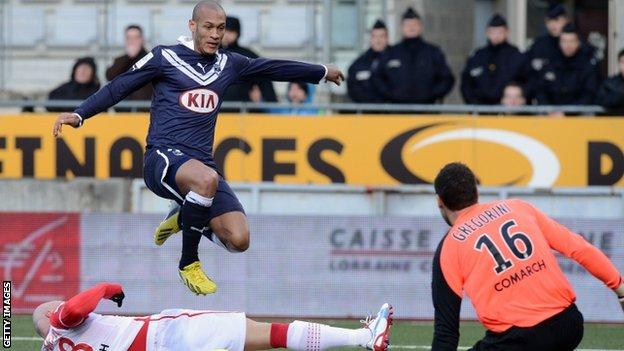 The 26-year-old, who signed a four-year deal for an undisclosed fee, becomes the Magpies' third signing in January after the arrival of fellow Frenchmen Mathieu Debuchy and Mapou Yanga-Mbiwa.

"I am really proud to have joined this fantastic club," Gouffran told Newcastle's official website.

The forward was Bordeaux's top scorer with 12 goals in 27 games for the French Ligue 1 club this season.

Gouffran played for Bordeaux in their 3-0 defeat by Newcastle in the Europa League this season and had just six months remaining on his contract.

Manager Alan Pardew said: "I liked the look of him when we played Bordeaux at St. James' Park earlier this season; pacy, direct and intelligent - and those are qualities I like in a footballer.

"Yoan comes to the Club with a great pedigree and, like the other signings we have made this month, is a player who will add considerable strength to our squad."

Gouffran, who started his career at Caen, confirmed on Tuesday he would be joining the Premier League side, who are 16th in the table.

He wrote on Twitter: "Tomorrow I will be a new player of Newcastle and I am proud. Thanks to everyone.

"I need a new challenge and therefore I hope that you respect my choice. I will follow all the results of the Girondins (Bordeaux)."

The former France Under-21 international replaces Demba Ba, who was the club's leading striker with 13 goals before leaving to join Chelsea earlier in the transfer window, and will wear the number 11 shirt.

His arrival takes the number of Frenchmen at St James' Park up to eight, although the club also contains French speakers Papiss Cisse, Mehdi Abeid and Cheick Tiote.

Newcastle winger Sammy Ameobi tweeted on Tuesday: "Need to brush up on my French because this is just getting ridiculous lol".