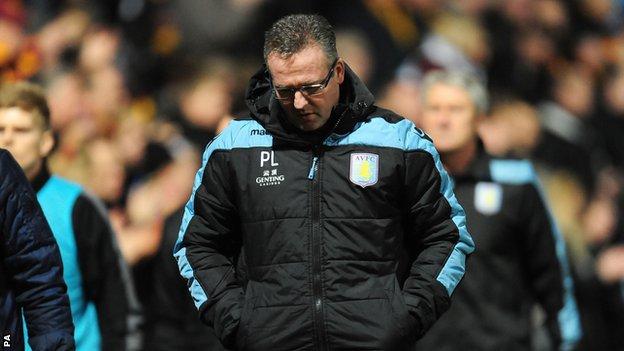 Aston Villa manager Paul Lambert's job is safe even if the club are relegated, it is understood.

Villa lost their Capital One Cup semi-final to League Two Bradford on Tuesday and are 17th in the Premier League, one point above the relegation places.

Lambert guided Norwich City from League One to the Premier League before leaving to join Villa last summer.

Murphy added: "If the unthinkable happened and Villa were relegated I think Lerner would still stick with Lambert.

"He backed the manager's decision to go for young, hungry players last summer to the tune of £23m and he admires Lambert's conviction.

"They talk regularly each week and I don't think Lerner has wobbled about the manager. Lerner hasn't sacked a Villa manager during a season. He feels it's shooting yourself in the foot. He wants calm decision-making and stability."

Lerner, who has put more than £250m into the club in just over six years - including its purchase - is not due in England in the immediate future.

He is in regular dialogue with Lambert, 43, about possible transfers during the transfer window but has made it clear to the manager that only a certain amount of money is available.

"Villa have had some frustrations this month seeking some new players but I wouldn't be surprised if Lambert ends up not buying anyone," Murphy said.

"And those he wants to get off the wage bill aren't exactly attracting many enquiries. Lambert won't be buying anyone just for the sake of it."

Villa play Millwall in the FA Cup fourth round on Friday, before entertaining Newcastle, who are one place and one point above them in the Premier League, on Tuesday.