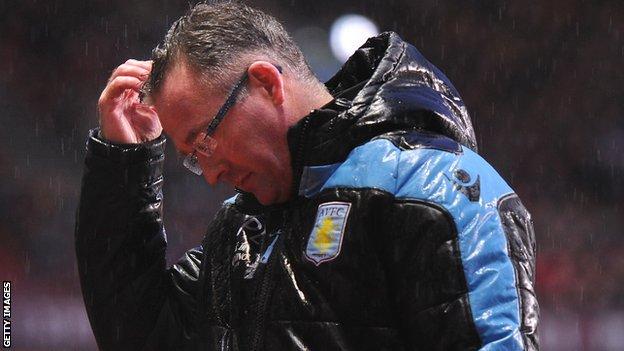 The blocks of snow dropping off Villa Park's Trinity Road stand mercifully avoided Paul Lambert as he stood alone in his technical area - but that was the only good news amid a blizzard of bad tidings for the Scot.

The snow may have missed but Lambert looked like the sky had fallen in on him and Aston Villa after their two-leg Capital One Cup semi-final defeat by League Two Bradford City.

Lambert was banking on a trip to Wembley not just for light relief from a fight against Premier League relegation, but as tangible evidence he has got Villa on the move.

Instead, Villa's demise, 4-3 on aggregate to a team from English football's fourth tier, provoked disappointment and discontent on such a scale that Lambert and owner Randy Lerner must surely fear the psychological impact it will have on a team of such brittle self-belief.

The former Norwich manager offered a note of defiance as he insisted he is still the man for Villa after his summer appointment and all the indications are that he retains the full support of Lerner.

There was no huge backlash against the manager at the conclusion of a 2-1 win for Villa that was not enough to overturn the 3-1 deficit from the first leg at Valley Parade. There were some voices raised against Lambert but most of the fury was directed at players who performed in a fashion that suggested they were gripped by blind panic once James Hanson had equalised Christian Benteke's early effort.

After all, this is the manager Villa supporters wanted as they demanded the sacking of his predecessor Alex McLeish. Remember the chants of "Paul Lambert's Claret And Blue Army" when he led Norwich City to a 2-0 win over Villa in McLeish's final game last season?

There is no doubt, however, that the reservoir of goodwill is being drained as the season slips into crisis. Lambert's pain was revealed when he said: "I'm embarrassed. I'm absolutely gutted, hurt, disappointed…everything.

"Everybody is hurting because we will never have a better chance to get to a cup final."

This was a game that could have altered the shape of Villa's season. It could still - but not in a good way because nothing can redeem a loss over 180 minutes to a team from the league's lowest division in the semi-final of a major competition.

Instead of the optimism of a Wembley final, there was an atmosphere of unrelenting gloom around Villa Park and a sense that the worst could still be to come.

Villa, confidence seemingly holed below the waterline, lie 17th in an increasingly competitive fight to avoid the drop as Reading and QPR suddenly wake up to the possibility of survival. They have won four league games out of 23 and have comfortably the worst goal difference in the division at -25.

And on Friday they travel to Millwall in the FA Cup fourth round, not a trip to be relished by any struggling side.

Most worryingly, it would appear Lambert's players are not carrying out what he regards as the most simple instructions - namely mark your man at set-pieces. The exasperation was evident in his voice as he reflected on conceding another goal from a corner, the fourth over two legs.

Villa's captain and Lambert summer signing Ron Vlaar was the latest culprit as he lost Hanson for Bradford's goal.

"It's not good enough," said Lambert. "It's simple enough to do. It's man for man at corners. The players know their responsibilities. It's 'man for man and me against you'. That ain't hard to understand."

The goals conceded stats suggest his players either do not understand, are not listening or are simply incapable of doing what their manager demands. None of which bodes well.

I was among plenty who thought Lambert's arrival would be the catalyst for an improving Villa this season but the odd win - especially the outstanding victory at Liverpool - can now almost be seen as freak occurrences.

Villa were bright in the first half but such is their lack of experience and almost basic common football sense that one blow brings them to their knees. And so it proved after Hanson scored.

Lambert was not without blame, putting on Darren Bent and Andreas Weimann for Barry Bannan - no favourite of the Villa Park crowd it seems - and Joe Bennett. With Gabriel Agbonlahor and Benteke already on, Villa had strikers everywhere but proceeded to play without the width to feed them.

The succession of long balls banged aimlessly and dealt with easily betrayed muddled thinking from manager and players. At times Villa look an alarmingly naive team.

Lerner's only hint to Villa's supporters about the club's immediate direction will come in the remaining days before the transfer window closes. The American does not do public pronouncements - Lambert did not even know whether he was at Villa Park on Tuesday - and will not change his habits despite the concern and confusion steadily growing among this passionate fan base.

He did give Lambert more than £20m to spend in the summer on Benteke, Vlaar, and youngsters such as Bennett and Matthew Lowton. It would risk Villa's season and their Premier League status if more do not arrive in the next eight days.

With Richard Dunne still out injured and other experienced figures such as James Collins moved on, Villa lack maturity and leadership. It was illustrated by the manner in which their relatively vibrant first-half display was transformed into a nervous wreck of a performance in the time it took Hanson to head past Shay Given.

It must be Lambert and Lerner's priority to ensure some streetwise talent turns up at Villa Park or the flirtation with relegation might just become a full-blown embrace.

A chill, icy wind was blowing around the ground as Lambert left on Tuesday. And no-one will be feeling it more than a manager who knows he may soon face even bigger worries than this humiliating setback.