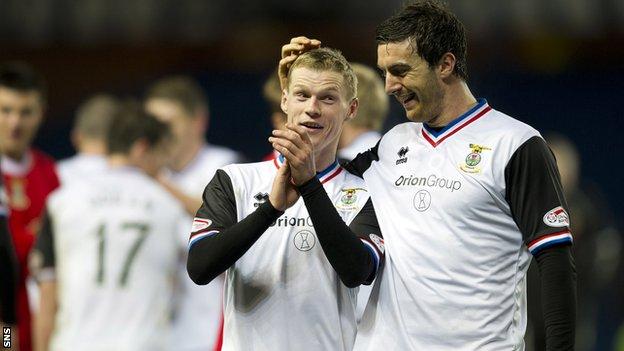 When Terry Butcher announced his decision to turn down Barnsley and stay at Inverness, the manager said it was to "make history" with the Highland club.

Caley Thistle, formed in 1994, are currently on what former boss John Robertson calls "an incredible journey".

Butcher's side are perched second in the Scottish Premier League, with the loss of just three games all season, are in the fifth round of the Scottish Cup and, on Saturday, have the chance of reaching the League Cup final.

Inverness meet Scottish Cup holders Hearts, who will have home city advantage at Easter Road, with supporters in maroon expected to outnumber those from the north by at least five to one.

Yet the Highlanders will be considered favourites for the tie.

"Inverness are favourites on form and ability," Robertson told BBC Scotland. "Rightly so.

"The team is brimming full of confidence and big Terry opting to stay on just adds to the feel-good factor at the club.

"They are on the cusp of a first major cup final.

"The club has never finished in the top half of the Scottish Premier League and now they are on course for a European place, which would be another first.

"It's just been a sensational season so far."

Digging out the handbook of sporting clichés, 'surprise package' doesn't even come close to covering the impact Inverness have made this term.

As is the case most years, Butcher, who joined the club in 2009, undertook a major rebuilding job in the summer, having lost key players Jonny Hayes, Gregory Tade and Greg Tansey after a 10th-place finish in the SPL.

Operating on a further reduced budget, the 54-year-old former England skipper drafted in a number of new recruits, including Gary Warren, David Raven and Ross Draper, who had been at Newport County, Tranmere Rovers and Macclesfield Town, respectively.

Throw in a 30-year-old keeper from the lower reaches of Spanish football - Antonio Reguero - and football pundits could be excused for not tipping Caley Thistle for the top.

"I don't think anyone expected the team to perform anywhere near the standards they have reached," admits Robertson, who steered Inverness to two Scottish Cup semi-finals when they were a First Division club.

"Four of the new faces have slotted right into the team and there has been a consistency of selection due to a lack of injuries and suspensions.

"They have succeeded through sheer hard work, confidence, belief, teamwork and their own abilities.

"[Owain] Tudor Jones and Draper do a great job protecting the back four and that allows the four forward players to press high up the park and really get at teams.

"Andrew Shinnie and Billy McKay, with all of his goals, have been grabbing the headlines, while Aaron Doran and Richie Foran are exciting players who have been chipping in with goals and assists."

McKay perhaps best illustrates the transformation in fortunes at the Caledonian Stadium.

The 24-year-old knocked in two goals during Saturday's 3-0 win over Aberdeen, taking his tally to 20.

"He'll be the first to say the team is combining well to set up lots of chances for him," said Robertson, who was a prolific finisher during his days with Hearts.

"He's putting them away and as a striker that's all you can ask for.

"Last season he missed a lot but it wasn't for lack of trying. He was hitting the woodwork or keepers were making saves.

"Now, his confidence is up and it's all just falling his way."

Of course, success will mean rivals, with deeper pockets, are casting a covetous eye in the direction of McKay, who is under contract for another season.

And the club, which averages home gates of less than 4,000, may struggle to hold on to talents like Doran, Shinnie and Draper, who will be free agents in the summer.

"Other teams will be looking at players and Terry Butcher will be in demand again for the wonderful job he's done," adds Robertson.

"It's great that he wants to finish what he's started this season.

"Terry loves the area and enjoys the laidback lifestyle but the club won't stand in the way of anyone moving on; that's the way it's always been."

Inverness and Hearts have drawn both of their SPL encounters this season and, despite cutbacks, the Tynecastle side retain several experienced players.

With the majority of the crowd behind the Edinburgh side, it will be like a tough away fixture for Inverness rather than a neutral venue but Butcher's boys have been victorious at Celtic Park, Pittodrie and Ibrox during this campaign.

Predicting a close contest, Robertson, a Hearts legend, has no concerns with split loyalties ahead of the tie.

"Whoever wins, I'll be happy," he smiles.