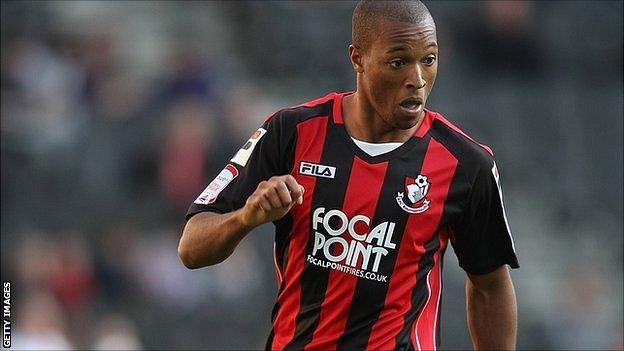 Bournemouth manager Eddie Howe says Wes Thomas is set to leave after being left out of the trip to Hartlepool.

Thomas, 26, has spent much of this season out on loan with the striker having successful spells at Portsmouth and Blackpool.

Howe had wanted to keep the player but revealed Thomas wishes to leave and clubs are chasing his signature.

"We'll see what happens with Wes. There is interest in him and he has a desire to go," Howe told BBC Radio Solent.

David took it like a man, he was disappointed but he is a team player and he wants to help us achieve our goal of promotion

Blackburn are one of the clubs who have been linked with Thomas and Rovers boss Michael Appleton says he is targeting three or four new players before the window closes.

"Whether they get over the line or not is another question. We'll be working our socks off to make sure it happens. We need three or four new faces to give everyone a lift."

Other clubs being linked to Thomas include Blackpool and Howe added: "Without going into too much details we've got time now before the end of the transfer window.

"If he doesn't go then we will review the situation."

Meanwhile, Howe says keeper David James does still have a future at the club, despite being dropped from the squad for Tuesday's victory at Hartlepool.

James was replaced by Shwan Jalal with new signing Ryan Allsop on the bench, but Howe says the veteran keeper is still part of his plans.

"David has done very well for us, he has been a big part of our unbeaten run," said Howe.

"But we had to make a big decision, more based on distribution rather than goalkeeping and Jalal is an excellent footballer, as well as an excellent goalkeeper, so that's why we came to the decision.

"But David is still very much part of our squad and I know he will be going forward.

"It's not like we've excluded him, we had to integrate Ryan also, and David will be helping us out with some coaching as well.

"He is still part of the club but sometimes you have to make tough decisions.

"He took it like a man, he was disappointed but he is a team player and he wants to help us achieve our goal of promotion.

"There is no animosity, it was done with the best intentions."