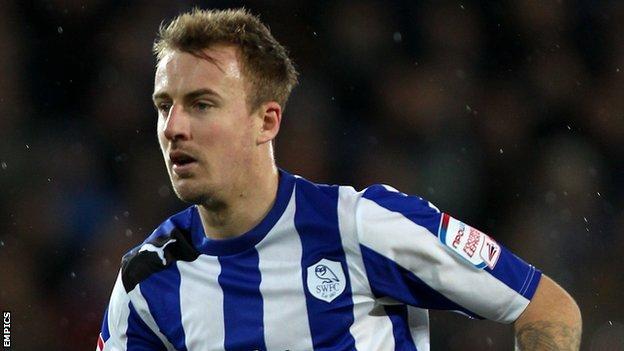 MK Dons have signed Sheffield Wednesday midfielder Chris Lines on loan until the end of the season.

The 27-year-old played 48 times in the Owls' League One promotion-winning campaign last season, but has featured in just six games this term.

"Chris is a player I have admired for a number of years now," said MK boss Karl Robinson. "In fact he is a player I tried to sign two years ago.

"Chris is a talented footballer who scores goals from midfield."

Lines, who missed the early part of the season with a groin injury, started his career at hometown club Bristol Rovers, where he scored 21 times in 168 league games, before joining Wednesday in the summer of 2011.

He has found the net three times in 53 appearances during his Hillsborough career.

"I am looking forward to joining MK Dons and hopefully getting some games under my belt," he said.

"I really need some playing time and one club that immediately came to my attention was MK Dons because I like how they play the game and they are doing well in League One."

Robinson is in need of midfield options, with

"It is no secret that I have wanted to bolster the midfield since we suffered the long-term injuries to Luke Chadwick and Stephen Gleeson," he said.

"And by and now Chris Lines we believe we have the creative spark we have been missing."