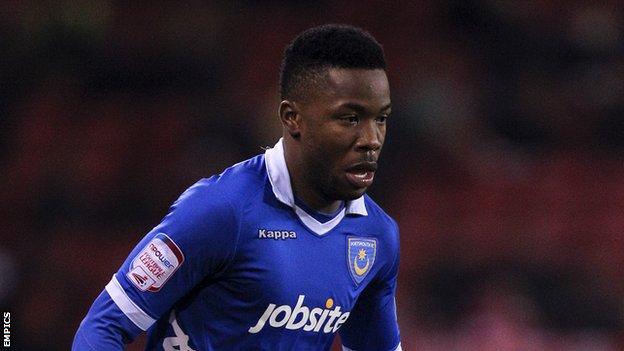 Dumbuya, 25, made 25 appearances for Pompey this season but was a free agent after leaving Fratton Park earlier this month.

Essam, 20, signed a new three-year deal with the Gills this summer but joins the Reds on a free transfer.

Dumbuya, a Sierra Leone international, has signed a six-month deal while Essam is contracted until the summer of 2015.

As part of the deal bringing Essam to the Broadfield Stadium, Gillingham will receive a percentage sell-on fee of any future transfer involving the defender.

"Connor [Essam] fits the template of players I want to work with," said Crawley manager Richie Barker. "He is young with lots of potential and has a real appetite to learn and improve.

"Losing Claude Davis this week meant we had to strengthen this area of the team and we now have, in my opinion, four excellent central defenders.

"Mustapha [Dumbuya] is a player we have monitored for a while. He is a very athletic individual who loves to go forward but knows that his first job in the team is to defend.

"He can also play in midfield and is a player quite a few clubs were keen to sign when Portsmouth released him."