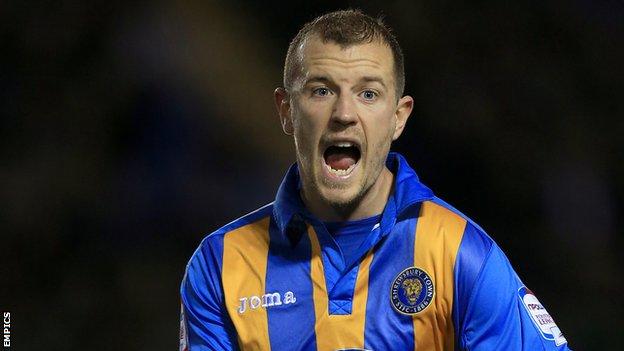 Shrewsbury midfielder Luke Summerfield has admitted he was "desperate" to play again after hernia surgery.

The 25-year-old, who was almost ever-present for Town before his injury, made his first start in over a month in Saturday's 2-0 defeat at Swindon.

"I've been desperate to get back even sooner than this," Summerfield told BBC Radio Shropshire.

"It was positive to get my first start for a while, it was just a shame with the way that it panned out."

He added: "Hopefully my match fitness and sharpness is going to come back and I can get back to the way I have been playing before I got the hernia."

Shrewsbury currently lie 18th in League One, with only one win in their last seven league games.

However, Summerfield believes that there is enough quality within the squad for the side to get out of trouble.

"There's competition for places all over the squad at the moment," the former Plymouth and Cheltenham man said.

"We all know everybody in the squad is capable of playing and holding their places in the team.

"It can only be a good thing - we all know how good we can be and hopefully we can get back to winning ways on Saturday."