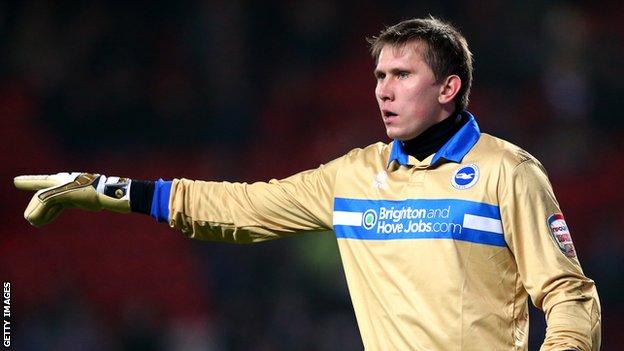 Brighton & Hove Albion goalkeeper Tomasz Kuszczak hopes he can move on quickly from his costly handling error at Birmingham.

A mistake from the Poland international meant Albion had to settle for a 2-2 draw against the Blues on Saturday.

He told BBC Sussex: "It was my mistake but this happens in football.

"I've got enough experience to understand it and sometimes the easiest ball can hurt you. I hope it is not going to happen again but it may."

The 30-year-old added: "I am a goalkeeper and it is my job. You have to live with that."

Kuszczak and Brighton returned to action on Tuesday night, when they drew 1-1 away to Blackburn Rovers.

The point was only secured when David Lopez converted a penalty deep into injury time, and the former West Brom and Manchester United keeper was not overly impressed with their performance.

We drew the game and got a point, but we didn't create enough or pass the ball well enough. We need to play better

"I really wasn't happy with how we played," Kuszczak continued. "It was not our standard.

Ok, we drew the game and got a point, but we didn't create enough or pass the ball well enough. We need to play better and keep the standard."

After the draws at St Andrews and Ewood Park, the Seagulls have now played out 12 draws in the Championship this season - the most in the division.

They currently lie seventh in the table, four points off the play-off places.

"At the weekend we lost two points as we only drew the game, but we played better," he said.

"It is a good point [at Blackburn] but obviously we are looking for something more.

"We want to achieve something more this season and maybe have a chance to go up to the Premier League."

Albion have a break from league action this weekend when they welcome Arsenal to the Amex Stadium in the fourth round of the FA Cup.

Kuszczak missed the third round victory over Newcastle United when manager Gus Poyet handed Casper Ankergren a start and the Pole is unsure whether he will face the Gunners.

"I'd love to play the game but the gaffer will decide who will play and I will respect the decision," Kuszczak added.

"It is not every day you play a team like Arsenal. It is good for the fans and for us to see where we are.

"We did well against Newcastle and now it is a bigger team coming again. We will try to impress, play well and maybe score a good result - who knows?"