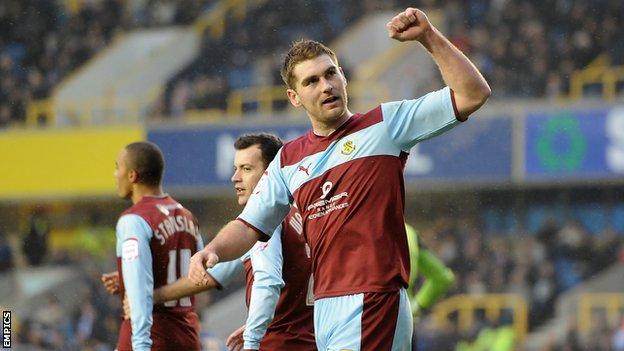 Striker Sam Vokes believes Burnley have shown in an excellent recent run that they are capable of mounting a promotion challenge this season.

have lifted Sean Dyche's side to eighth, four points from a play-off spot.

He told BBC Radio Lancashire: "We've shored it up at the back and going forward, we've got that base to take it on. We're pushing, so who knows?"

"We've got the groundwork there and we look stronger with every performance."

Vokes scored the opening goal in a and thee Wales international has started the last four matches in the absence of 23-goal top scorer Charlie Austin, who is

The majority of Vokes's appearances since have been as a substitute and the 23-year-old is fully aware that dislodging Austin from the starting line-up permanently will be a difficult task.

"He [Austin] has had a great start to the season," said Vokes, who has scored three times this season.

"All I can do is knock on the door and hopefully get a chance, even when he comes back.

"It was good to get another 90 minutes under my belt [at Millwall] and to top it off with a goal and three points was fantastic."