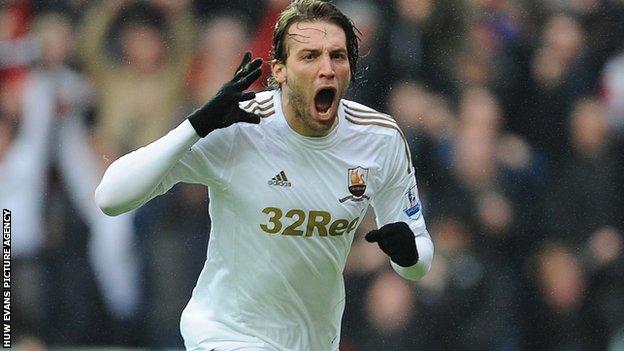 Striker Michu has signed a new four-year deal to extend his stay with Swansea City.

The Spaniard has taken the Premier League by storm since his £2.2m summer switch from Rayo Vallecano.

The 26-year-old has committed himself for an extra season to the Swans and will now stay at the Liberty Stadium until 2016.

"It was an easy decision for me,'' said Michu. "I am living a dream here at Swansea."

Michu, who can play as an attacking midfielder or centre-forward, has scored 16 goals in 28 appearances for the Swans.

He has already been described as the signing of the season by some pundits and has emerged as a cult hero in Swansea.

Manager Michael Laudrup has praised his striker's contribution and described him as "the bargain of the season."

I've read and listened to all the speculation, but it doesn't interest me, and that's why I've signed a new contract

"I'm probably enjoying my football more than ever. It's easy to play with this team and I have the chance to reach the first final of my career," Michu added ahead of Swansea's Capital One Cup semi-final second leg on Wednesday.

"I'm really happy here in the city with the people, the club and the fans. Everyone has been so nice to me since I arrived.

"I think the club are happy with me because they have given me a new contract. I am certainly happy with the club.''

Michu became Laudrup's third signing when he joined from Rayo Vallecano in July.

He began his career with his local club Real Oviedo in the lower leagues, before moving to Celta de Vigo B in Segunda Division B in 2007.

His contract with Celta expired in June 2011 and he signed a two-year deal with Rayo Vallecano, who were newly promoted to the top division of La Liga, where he scored 15 league goals and two in the cup last season.

"I'm happy here," said Michu. "I've read and listened to all the speculation, but it doesn't interest me, and that's why I've signed a new contract.

"I'm enjoying myself too much because the team always tries to play football. All I think about is the next game and helping Swansea be successful. This is my life.''