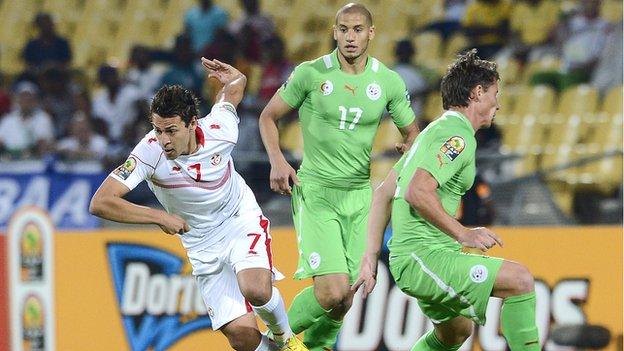 Algeria midfielder Adlene Guedioura says his team must forget their defeat by Tunisia in their Africa Cup of Nations opener and focus on beating Togo in their next Group D game.

The Fennec Foxes lost 1-0 on Tuesday as Youssef Msakni came up with a stunning, 90th-minute winner.

Guediora now feels there's no room for error against Togo on Saturday.

"We don't have to ask questions or reflect about that. We have to win," Guedioura told BBC Sport.

"Togo are a good team and a tough side, we saw on Tuesday that they caused problems for Ivory Coast so now we have to focus on that match."

While Algeria are rated as the second best team in Africa in the Fifa rankings and were one of the pre-tournament favourites, they will face a tough test against The Sparrow Hawks who will also be looking to bounce back after a 2-1 defeat in their opener - a result that was a little harsh on them.

Guedioura accepts that the defeat against Tunisia is a setback but the Nottingham Forest player is still confident Algeria they can have a successful Cup of Nations.

"It's difficult to start the competition like this. We played well and we had great occasions to score, including my shot at goal. It's difficult to take but we must look forward," he said.

"We still have two games and six points to take. We expect to win these games and we're looking forward."