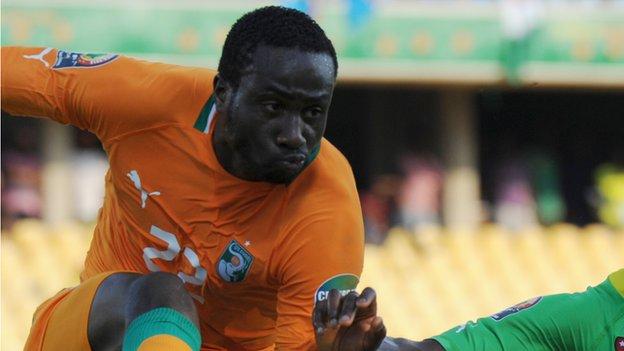 Ivory Coast's Sol Bamba is confident they can cope with being favourites to win the Africa Cup of Nations.

The Elephants beat Togo 2-1 in their opening game on Tuesday, thanks to an 88th-minute goal from Gervinho.

Bamba told BBC Sport: "We are confident because we've been there before. We always have pressure on us and we want to perform, for us and for everyone

"We're going to take it step by step. We got three points against Togo, now we have to be ready for Tunisia."

The Trabzonspor centre-back, who used to play for Leicester, feels that the pressure has eased going into the next round of matches following their opening victory which puts them top of Group D with with Tunisia, who beat Algeria 1-0.

The top pair will meet in Rustenberg on Saturday.

Bamba added: "We know how important first games can be. It gives us more confidence now we've got three points and it's easier now to wait for the second game.

"It's a very tough group, Togo was a difficult game, there was definitely relief at the end."

"Now it's going to be even more difficult in the second and third matches. We just need to be ready to fight every game and try to qualify for the next round."