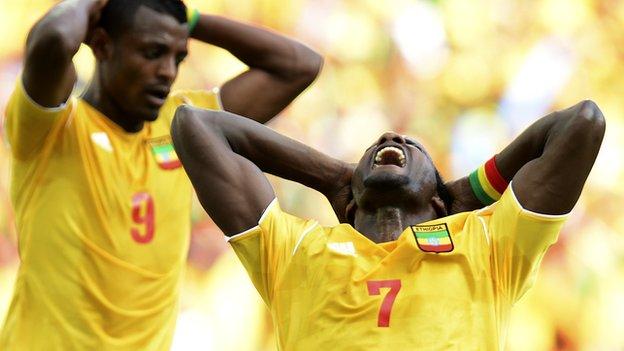 Ethiopia have been fined $10,000 by the Confederation of African football for the conduct of the team's supporters in Monday's match against Zambia.

Fans threw missiles, including plastic vuvuzelas, on to the pitch after Ethiopia keeper Jemal Tassew was sent off in the first half of the 1-1 draw.

Half of the fine has been suspended on condition Ethiopia are not found guilty of a similar offence at the tournament.

Tassew has been banned for two matches for violent conduct.

The 23-year-old was sent off 10 minutes before half-time after launching a flying, high-footed tackle on Zambia's Chisamba Lungu.

Both players ended up on the floor and Tassew was being taken off the pitch on a stretcher when he received his red card.