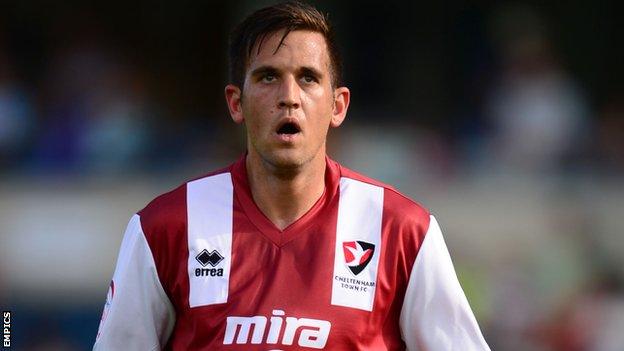 Midfielder Darren Carter has re-signed for League Two Cheltenham Town until the end of the season.

The 29-year-old former Premier League player joined the Robins in the summer on a short-term contract, which expired this week.

Manager Mark Yates said "crossed wires" with the player's agent had delayed the deal being finalised but was "hopeful" of a resolution.

Carter has made 27 appearances for the promotion chasers, scoring five goals.

Solihull-born Carter started his career at Birmingham and played 53 games for Blues before leaving to join rivals West Brom in 2005.

He spent two seasons at the Hawthorns and went on to have a spell at Preston, where he was released in 2011.

Carter was invited to join Brighton for pre-season that summer but his trial the Seagulls was cut short after he suffered a serious groin injury.

He spent the next 18 months in recovery and was back training with Birmingham before being given the opportunity to reignite his career under Yates at Cheltenham.