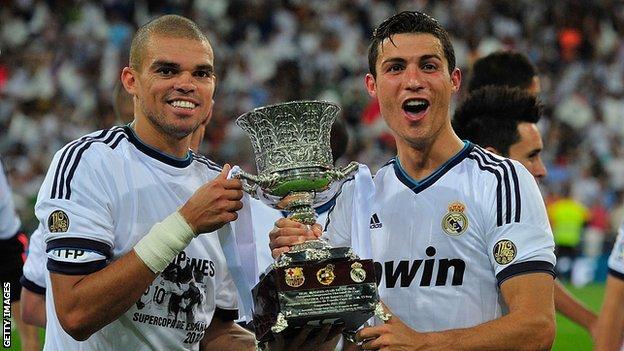 Real Madrid remain top of world football's "money league" after becoming the first club in sport to earn more than 500m euros in a season.

Barcelona were second, while Manchester United, in third, were one of seven Premier League clubs in the top 20.

Manchester City rose five places to seventh after their revenues increased by 51% from the previous season.

"This shows how much people love their sport, even in a recession," Dan Jones, lead partner of the sports business group at Deloitte, told BBC Sport.

"Top-level sport has been resilient to the recession, particularly in terms of broadcasting and commercial rights. To see 10% growth across the top 20 clubs, as well as a quadrupling of revenues over the last 15 years, is clearly impressive."

However, Jones expects both Barcelona - whose revenue was up 7% to 483m euros (£405.5m) - and Manchester United to break the 500m euros revenue mark within the next couple of years.

And he believes United, who topped the list from its inception in 1996-97 until 2003-04, will start to seriously challenge the Spanish duo again in the coming years.

An improved run in Europe, along with the start of a huge shirt sponsorship deal with General Motors and the Premier League's new TV rights deal, worth an estimated £5bn, should help United's revenues increase dramatically.

Indeed, Jones thinks Premier League clubs could comprise at least half of the money league once the Premier League's new TV deal kicks in next season.

While Real and Barcelona come out on top, they are the only Spanish sides in the top 20 after Valencia were replaced by Newcastle United in 20th place. This is mainly because La Liga sides are able to negotiate their own TV deals, meaning the big two pull in huge deals, leaving their rivals far behind.

The Premier League, in contrast, has collective bargaining, meaning all 20 clubs are able to share TV revenue.

Real and Barcelona will expect their revenues to increase further in future. The Madrid side plan to redevelop their Bernabeu stadium to create more corporate space, and their shirt sponsorship deal expires at the end of next season.

Rivals Barcelona also plan to redevelop their ground, the Nou Camp, which should increase matchday income.

Manchester City showed the most impressive growth of any side in the list, increasing their revenue 51% from 169.6m euros (£153.2m) to 285.6m euros (£240.1m). This was built partly on their Premier League triumph, though mainly on the start of a 10-year sponsorship deal with Etihad Airways, which helped double commercial revenue to £112.1m.

Jones said: "Manchester City have been a great success story on and off the pitch over the last few years and we'd expect them to really challenge Chelsea and Arsenal, who are the two teams immediately above them in the list."

The top 20 is comprised entirely of teams from the big five leagues - England, Italy, Spain, France and Germany.

Portugal's Benfica, in 22nd with revenue of 111.1m euros (£93.4m), are the highest-ranked club from outside these countries.